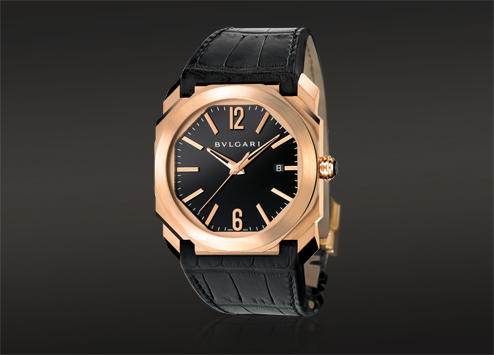 With bold architectural influences and geometric design, the Bulgari Octo is an ambassador for contemporary men’s watches. One of its revolutionary features is BVL 193, a new in-house automatic movement with automatic winding through a unidirectional oscillating weight on ball bearings, which guarantees optimal winding. The two barrels make a 5-hour power reserve. The Octo’s construction and octagonal shape pays tribute to Bulgari’s classical designs symbolizing balance and harmony. Bulgari’s first watch, the Bulgari Bulgari, was released in 1975. Since then, Bulgari has continued to combine Swiss expertise with Italian design to create its collection of wristwatches. Bulgari develops all the complicated mechanisms, calibers and other parts for these watches.