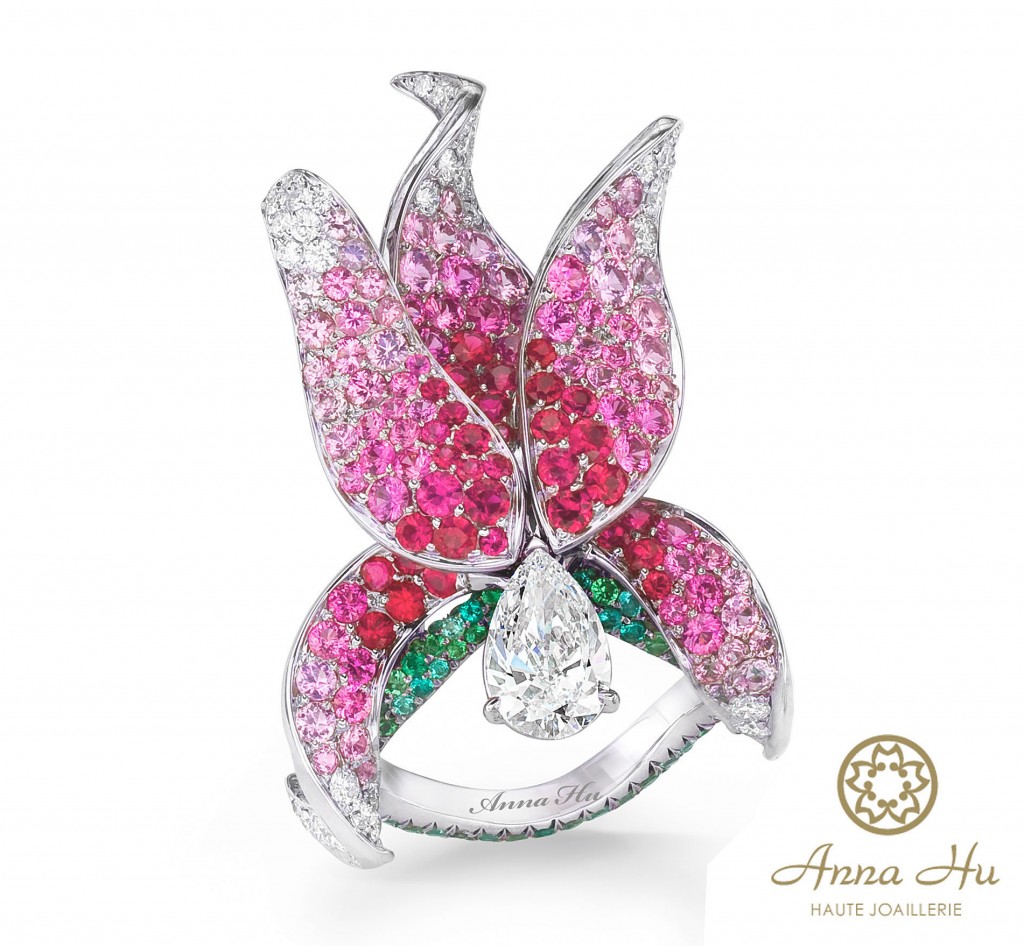 If Anna Hu’s jewelry evokes the feeling of a symphony, with its flowing lines, bold color, layers of richness and hints of whimsy, it’s no coincidence.

Hu trained as a classical cellist until she was sidelined by an injury. This didn’t dull her creativity. She turned to jewelry design, a world she had learned from her parents, who are both in the gem trade.


Hu sees jewelry design as a form of art, like painting – or music. “I want my jewelry to be like music, with a sense of movement,” she told the Wall Street Journal.

Hu switched course from music, earning master’s degrees in art history and art administration, becoming a Graduate Gemologist and interning with Christie’s auction house in the jewelry department in 2002. She went on to work at Harry Winston and at Van Cleef & Arpels.

The jewelry artist has risen quickly in the design world. In 2011, she received China Institute’s Artistic Vision award. And in 2012, a book of her first 100 pieces, fittingly titled Symphony of Jewels, was published.

Hu opened her first boutique in her native Taiwan in 2007, followed by her store in the Plaza Hotel New York in 2008. She also has a stores in Shanghai and Taipei.

Hu doesn’t make jewelry for the mass market. She makes one-of-a-kind pieces for select clientele who include Madonna, Gwyneth Paltrow, Oprah Winfrey and Scarlett Johannson. None of these ladies are known for being unassuming—like Hu’s jewelry, they’re bold and colorful.


“I only make one of a kind, or at most, three to five of the same piece,” Hu told Wells Fargo Conversations. “It is something personal, something symbolic, that I strive for.”

Some of Hu’s pieces have a clearly classic style. Her concentration at Parsons School of Design was 19th century French jewelry, which obviously inspired her. Hu’s Gaia earrings feature large sapphire drops with pave diamonds criss-crossing the back and emerald-cut diamonds above.

Even in more whimsical pieces, classical curves bring structure, elegance and flow. Delicate leaves, for example, might be encircled with diamonds to highlight the composition.

While the workmanship is intricate, the overall look is bold. Rings are large, sometimes covering more than one finger. Earrings show huge proportion. Cuffs are substantial.

Her studies in art shine through in her use of color. She picks each gem individually, from a palette of colored gemstones, and often uses a fade effect, going from a deep color, gradually lightening. This adds depth and realism to each piece. Her Giverny Garden collection, named after impressionist Claude Monet’s house in France, show the colors of his paintings in pinks, greens and blues.

Paltrow, who wore Hu’s jewelry at the 2012 Oscars, blogged that one piece was “inspired by Van Gogh’s painting, Irises, and is made up of garnets, emeralds, sapphires and diamonds in the same colors as those of the painting. The orchid cuff on the right was inspired by Monet’s color palette and designed while listening to Chopin.”

Nature is a more prominent inspiration. Flowers, birds, butterflies, serpents and seahorses all feature, rendered in delicate detail and full of color. Snakes are one of her favorites. “In the Egyptian culture, the snake is the goddess of jewelry and the goddess of fortune,” she told W magazine. “It’s almost equivalent to the dragon in Chinese culture.”