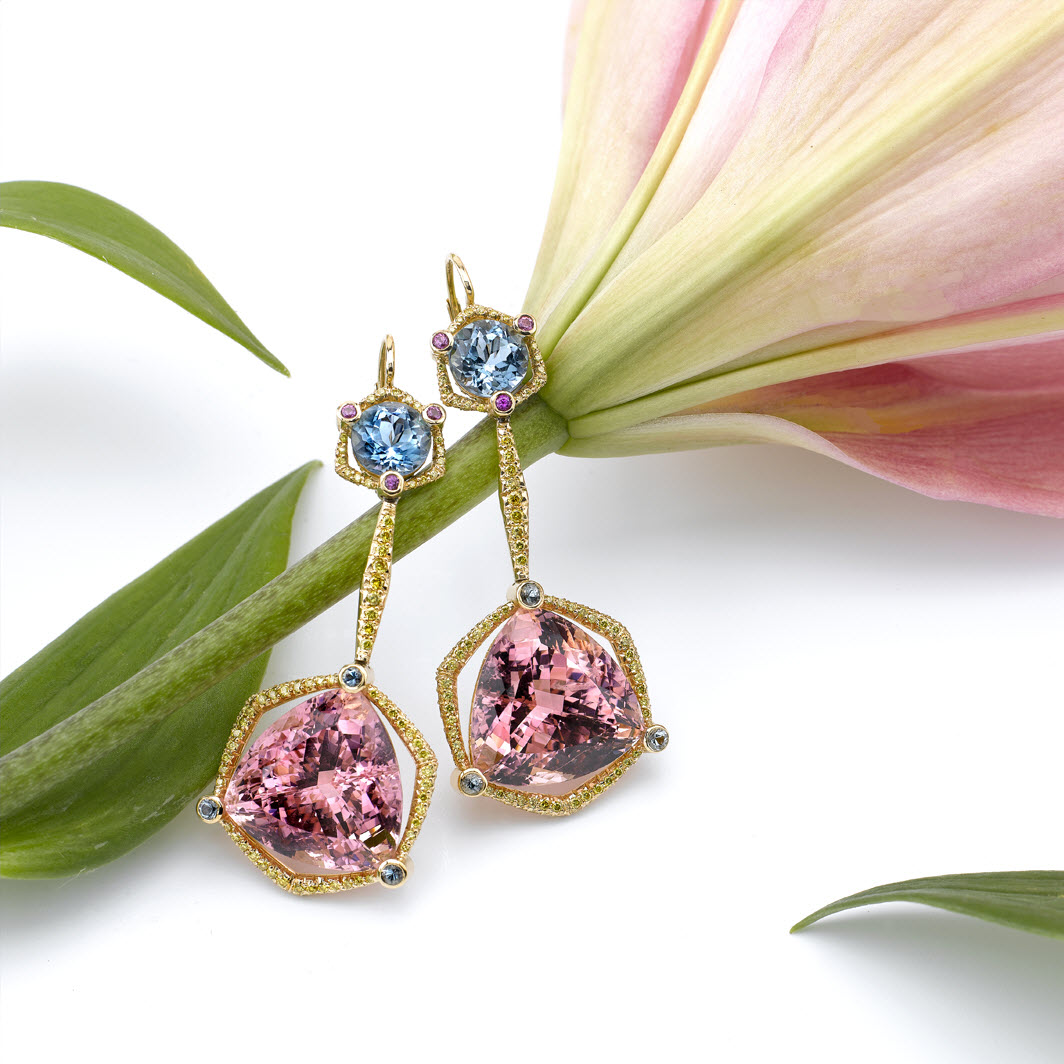 These flower earrings are made from pink tourmaline, fine aquamarine and yellow diamonds set in 18k gold. 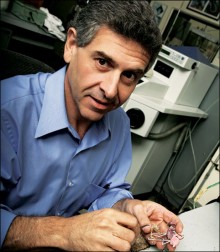 Ricardo Basta at work in his studio.

Kinetics may the single most defining characteristic of Ricardo Basta’s custom jewelry. The gems are exquisite. A swirl brooch holds a citrine center stone that shimmers with every color of the sunset while accents of diamonds and rubies are reminiscent of a Tibetan prayer wheel. And the designs themselves are skillfully handcrafted using cutting-edge technology with traditional methods of design, fabrication, and production.

But the delicate balance of static and moving parts gives each individual creation a life of its own.

Karen Basta, Ricardo’s wife, calls it his ability to “articulate movement.” She says, “In the salon when Rick gets to sit down and invent his piece, he incorporates those (kinetics) into his design. It might be simple. Rather than move back and forth, they’ll spin.”

It’s a fine blend of art and physics played out on a miniature scale, such as a pair of black diamond earrings so perfectly balanced that they spin inside a platinum spiral, or a flamingo brooch that moves its head realistically in the grass. 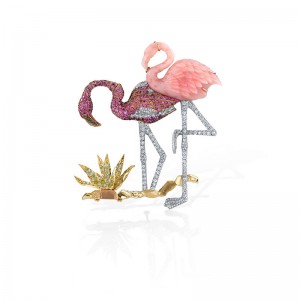 Carrying on a family tradition

Basta’s Fine Jewelry specializes in custom designs with a focus on engagement and wedding rings. Today, the business is housed in a comfortable, well-lit store in Century City, California, where Karen assists customers while Ricardo works on designs in the back.

It’s like that some of the time, at least.

Ricardo is also likely to wander down to chat with customers. The store emanates this warm feeling of ease and confidentiality. This is no small feat in the competitive, celebrity-fueled atmosphere of Hollywood, and the Bastas carefully protect their high-profile clients’ privacy.

Basta’s fine jewlery is rooted in family. Most of his employees have been with the company for at least ten years, and “anyone who joins the team feels the family dynamic right away,” says Katrina Ortiz-Chavez, PR/marketing and social media manager. Ricardo’s cousin, Ernie Eichberg, is the company’s “other boss” and Karen and Rick’s two children, a son and daughter, plan to join the business as soon as they finish college.

Basta’s grandfather sold jewelry in Germany, and later after moving to Argentina, he imported watches from Switzerland that were sold all over South America.

Basta’s uncle, Ernest Eichberg, continued the tradition, apprenticing with some of Europe’s finest trained jewelers before moving to Los Angeles, where he opened his first shop in 1956.

More than 20 years later, Basta, with the support of his parents, moved to Los Angeles to begin an apprenticeship with his uncle. He says, “I was always interested in the jewelry business. Even though I grew up in Argentina, that always appealed to me. So I wrote to my uncle and said I wanted to learn the trade. I was about 18 then.”

His uncle passed on to him the old European techniques of jewelry design that include cutting, casting, soldering and cold-joining (using staples and rivets to assemble parts) for which Basta has become known. U.S. auction houses will often call on Basta to restore old jewelry using these methods, which tend to have surpassed most modern jewelers.

These traditional European methods also include precise use of movement and ways of working with precious metals—particularly platinum. Basta says he developed a love for the elaborate styles and patterns of antique jewelry, especially those from the Victorian, Edwardian, and Deco periods, when he first began working on old jewelry during his apprenticeship. This can still be seen through his work today, in his naturalistic jewelry with clearly recognizable fruit, flowers and other features—a style popular during the 19th century.

GIA Public Relations and Communications Coordinator Kristin A. Aldridge says, “GIA was privileged to display several of Ricardo Basta’s brooches. As a teaching institution, all GIA museum exhibits serve as a way for our students to learn more about the gems and jewelry on display.” 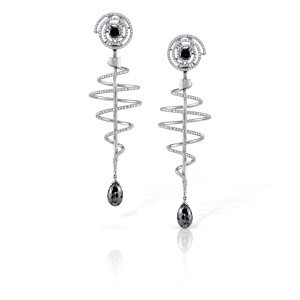 These black diamond and platinum earrings spin inside the spiral.

Looking at the big picture

Karen says her husband’s work is best appreciated as a large picture, not by focusing on individual pieces. Perhaps the best examples of this are Basta’s designer brooches. She says, “I hold these very dear because of all the intricacies. The kind of projects he takes on, he can put all his passion into them.”

Karen also comes from a lineage of jewelers and gemologists. Her uncle was Robert Crowningshiled, the renowned gemologist who helped develop and teach the GIA diamond grading system, which is now the standard worldwide. Her background has given her such a refined eye that is necessary for the complex scrutiny that comes in searching for rare and unusual gemstones. One quality she looks for is color. “The more obscure and odd the color, the more I like it,” she says.

This institutive sense of color also serves her in choosing just the right stone for clients. She recounts canvassing for a specific color of sapphire for an engagement ring. Nothing was clicking. Finally, she turned to her client.

It was a vivid enough description for her choose the perfect stone for the ring. 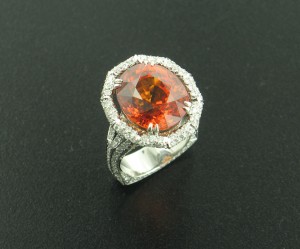 This spessartite garnet and diamond ring set in platinum won First Place in the AGTA 2004 Spectrum Award for Bridal Wear.

Although Ricardo doesn’t wear jewelry himself, he said, “I do enjoy making jewelry for my wife, and I love seeing her wear it. She loves all gemstones and gets first pick of all the stones.”

One stone Karen chose a few years back was an exquisite burnished orange spessartite garnet. Basta laughs, “I had to steal that one back from her.” He set the stone in platinum accented with diamonds, and it earned first place for bridal wear in the 2004 American Gem Trade Association Spectrum awards. Throughout the years, Basta has received numerous other Spectrum awards, in addition to other prestigious accolades from the jewelry industry.

What seems more pertinent, however, is how he will move forward. At the moment, it’s a zebra brooch with yellow sapphires.

Leslie Jordan Clary is a freelance journalist who has traveled the world visiting gemstone mines and writing about jewelry and the people involved in its creation.