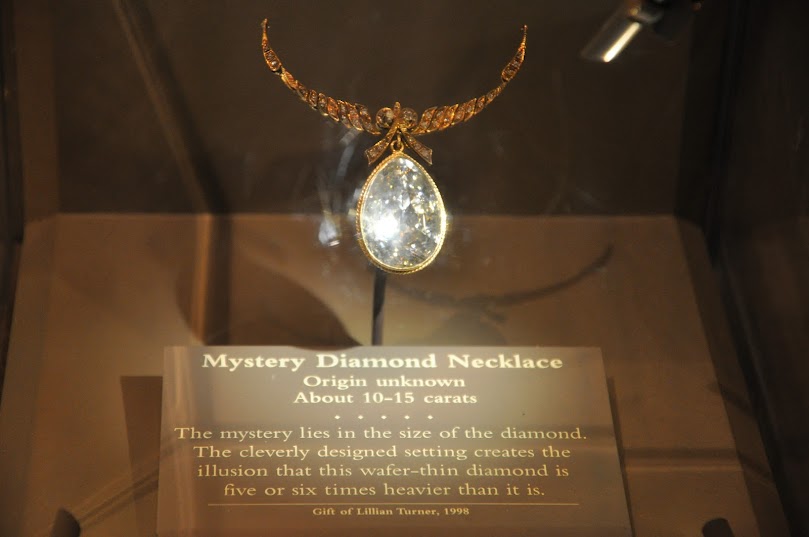 Though not the museum's largest diamond, the intrigue of the Mystery Diamond Necklace lies in its clever design, which makes it look much heavier than it is.

Travelers to Washington’s Smithsonian museums know that they can expect to see several things: airplanes, Dorothy’s ruby red slippers, dresses of many First Ladies, and of course, the famed Hope Diamond at the National Museum of Natural History, which is part of the National Gem Collection at the Janet Annenberg Hooker Hall of Geology, Gems, and Minerals.

What might they not know? The hall, one of the Smithsonian’s most popular exhibits, is a massive collection of more than 10,000 gems and 375,000 mineral specimens—the largest collection of its kind in the world. Standout items include the Hooker Emerald Brooch, the Star of Asia Sapphire and a full exhibition discussing the birth and evolution of the solar system, offering unique glimpses at the world’s most famous gemstones, grouped by shape, color and other characteristics.

Click to enlarge
Likely a wedding gift in 1810 from Napoleon I to his second wife, this piece boasts more than 1,000 diamonds. Between 1956 and 1962, Van Cleef & Arpels replaced its original emeralds with 79 Persian turquoise stones.

Tour the glass cases to peruse a collection that would rival the best in the world – as impressive, many say, as the Queen’s jewels in England. A single room houses:

Because of the exhibit’s popularity, it’s suggested to visit early in the day or late in the evening, as midday tours often crowd the cases. Spend time walking through the exhibit as a whole, as each piece is housed in an individual case, with a small plaque or plate explaining the piece’s history and relevance to the museum. 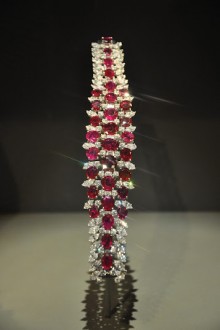 Click to enlarge
In this Ruby and Diamond Bracelet, 31 Burmese rubies are the deep color of “pigeon blood.” This piece was reset by Harry Winston, Inc., around 1950.

Some of the museum’s best pieces are actually new additions, given to the gallery in celebration of its 100th anniversary. These pieces include the Cullinan Blue Diamond, a 5.32 carat blue diamond adorned with 251 other diamonds, given as a “consolation” gift by South African diamond magnate, Thomas Cullinan, to his wife after promising that he would find her the largest diamond in the world. That diamond, the famed Cullinan stone, weighing 3,106.75 carats, was given to England’s King Edward in 1905. Today, the diamond is displayed next to the world’s most infamous necklace, the Hope Diamond.

Another “not miss” piece is the Royal Butterfly brooch, a three-dimensional objet d’art set with 2,318 gems totaling a near 77 carats. One of its most intriguing design attributes is the use of four large rough diamond slices atop a layer of faceted diamonds, forming the centers of the wings. Created in 209 and donated to the collection in 2010, this magnificent piece features sapphires, rubies, fancy-colored diamonds, and tsavorite garnets.

Beyond the National Gem collection, it would be rather simple to add the following destinations to your visit, as all are housed on the museum’s second floor: