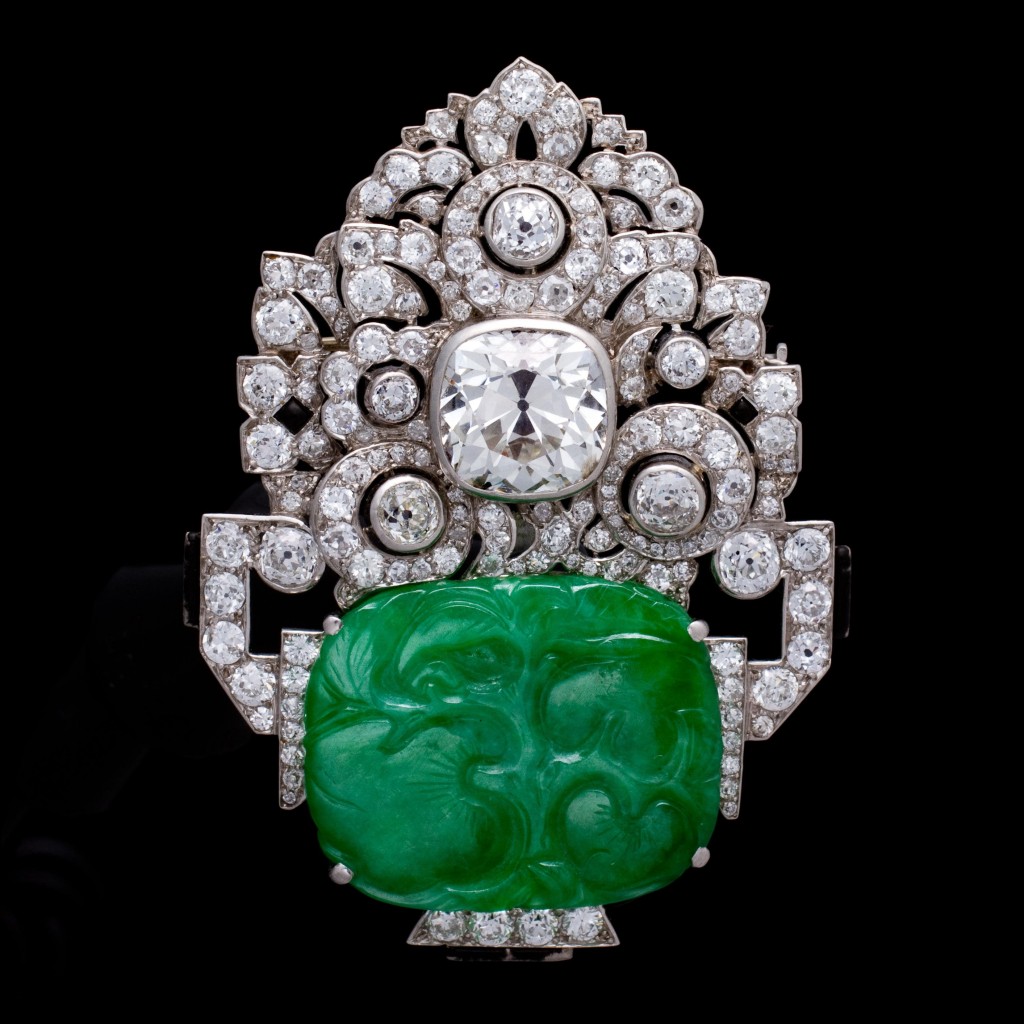 Jewelry auctions bring the opportunity to acquire fine and rare pieces or gemstones of a size and quality hardly seen on the market. Such was the case in the Bonhams auction of fine jewelry on April 15 in New York. 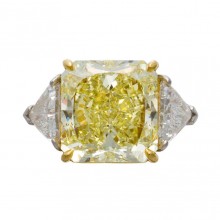 One such gemstone was a 15.45-carat fancy yellow center diamond in a solitaire ring. Fancy yellow diamonds are hard enough to find, let alone one of this remarkable size. In addition, the diamond is internally flawless—a rare gem, indeed. The center modified rectangular-cut diamond is flanked by white diamonds weighing 3.5 carats in triangular shoulders. The ring was owned by Dorothy McGuire of The McGuire Sisters, a group that had half a dozen gold records in its 50-year career. With a pre-auction estimate of $280,000-380,000, the ring sold for $302,500.

In the realm of items rarely seen, a one-of-a-kind 1920s Mauboussin diamond and jadeite jade brooch garnered interest. The jadeite is carved with a flowerpot and vine motif and the platinum and diamond stylized design above it accents the jade. A cushion-cut diamond of around 6.35 carats sits in the center. The certified piece sold for $122,500, well above the pre-auction estimate of $70,000-90,000.

Jewelry pieces from the world’s most famous houses are always a hot number. A Tiffany & Co. vintage cuff and earclip suite with an inlaid onyx and mother-of-pearl checkerboard design showed the kind of bold, wearable jewelry that often makes a splash. 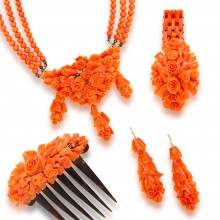 “Women today want jewelry that speaks to their individuality—whether amorphic or architectural, humorous or spiritual. It is fine jewelry that is meant to be worn,” explained Virginia Salem, Director of the Jewelry Department at Bonhams in New York. This was certainly the case for the architectural Tiffany & Co. set.

The penchant for modern jewelry doesn’t mean that unusual, older pieces aren’t still sought-after. A carved coral suite from the 1870s sold for $10,625, way above its estimated sale price of $1,500-2,000. The set includes a pendant necklace with a triple strand of coral beads, a bracelet, pair of earrings and a hair comb, all featuring a delicate rose motif and mounted in 14 karat gold. Adding to its value as a set, it still has its original Italian box.

Works by the “first jeweler to the stars” Paul Flato also made it to the auction. The designer had celebrity clients from the 1920s to 1940s, including Greta Garbo, Mae West, Rita Hayworth, Ginger Rogers, Marlene Dietrich, Katherine Hepburn, and Gloria Vanderbilt. Although the designer’s life had been fraught with scandal—he was convicted of fraud and spent time in prison—his modern designs still captivate. 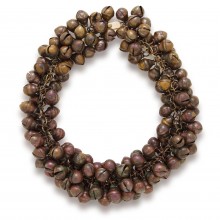 Click to enlarge
A brass and 18 karat gold necklace by Paul Flato, Mexico City, circa 1980.

One Flato piece that sold for $9,375 at the Bonhams auction was a brass and 18 karat gold necklace from around 1980. This piece is the only example of this design and features brass bells, representing the traditional feast celebrations of Mexico’s much-revered Virgin of Guadalupe. Flato moved to Mexico to make a new start following his imprisonment. “These extraordinary pieces, acquired by a family friend and admirer of Flato, demonstrate his creative, witty and inventive sense of design,” said Susan Abeles, Bonhams U.S. Head of Jewelry.