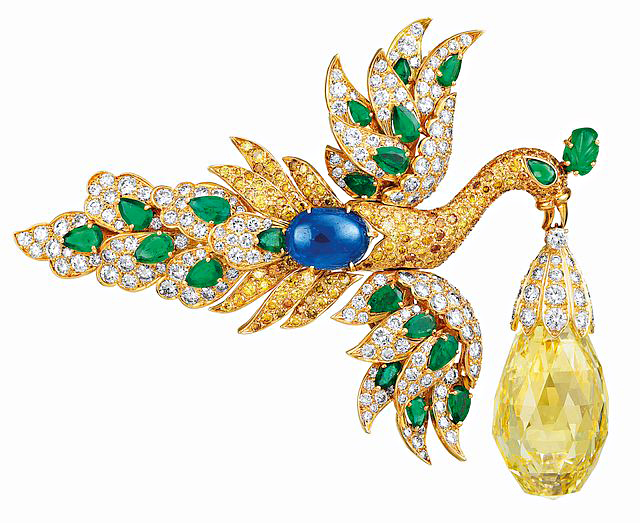 Brooches have only one pin, whereas clips — like this emerald, sapphire, and diamond stunner from the 1970s — have two. Photos courtesy Van Cleef & Arpels. 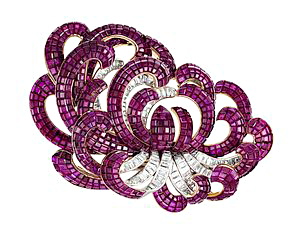 In 1933, Van Cleef & Arpels patented the Mystery Set, a revolutionary technique which lets a piece of jewelery’s stones take center stage by hiding the metal upon which they are set.

Playful ballerina and fairy clips are known as a Van Cleef & Arpels signature. But the jeweler’s catalog of pins goes far beyond just the one mesmerizing motif. Now, Van Cleef & Arpels is showing off its dazzling diversity in “Art of Clip,” an exhibit of 280 of the brand’s brooches and clips from the end of the 1910s to the 1970s. On display at the Van Cleef & Arpels boutique in Moscow’s GUM shopping and entertainment complex until Sept. 30, the collection finds de rigueur florals and animal shapes giving way to stylized ribbons and scrolls as the years pass; the aforementioned tiny dancers spinning into cascading fauna, and, eventually, exotic designs borrowed from various cultures. How the posh pieces were worn, likewise, evolved over the decades. They’ve decorated everything from dresses and collars to belts, shoes, and hairdos. The Minaudière, the label’s 1933 bag creation meant to hold all of a fashionable lady’s essentials, was also oft adorned with a clasp that was wearable as a clip. On Oct. 15, the fascinating journey that is “Art of Clip” will move to another Van Cleef & Arpels Moscow boutique — this time, on Stoleshnikov Lane — where it will astound until January 10. 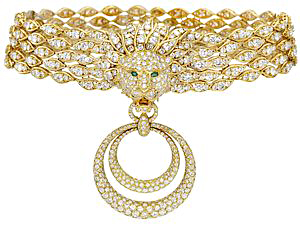 Once in the collection of actress Dame Elizabeth Taylor, the glittering Barquerolles choker is transformable into two bracelets and features a detachable pendant-clip.