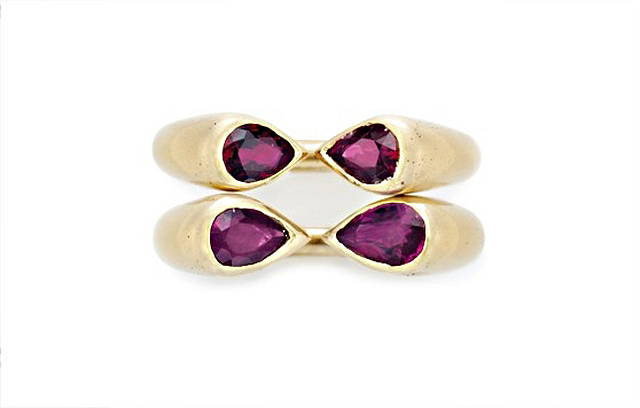 Along with pieces from Graff, Van Cleef & Arpels, Boucheron, and more, Christie’s is auctioning off exclusive jewels by JAR. On view from April 10 to April 13 at Rockefeller Center with the rest of the Magnificent Jewels catalogue is this set of gold and ruby rings by JAR. Photos courtesy Christie’s Images LTD. 2015. 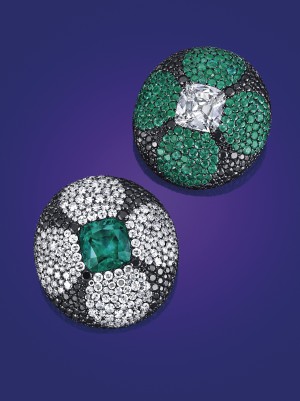 A spectacular pair of the designer’s ear clips have a cushion-cut diamond and a cushion-cut emerald, weighing approximately 8.5-carats and 11.24-carats, respectively, as their focal points.

Collectors coveting a rare JAR-signed bauble for their treasure chest should mark their calendars for April 14. That’s when Christie’s New York presents Magnificent Jewels, a 312-lot sale that includes three exquisite offerings from the Paris-based designer. Resplendent with rubies, sapphires, diamonds, and emeralds are two sets of ear clips as well as a pair of rings. Expected to garner the highest bid out of the trio? Lot 310. Displaying JAR’s fondness for asymmetry and pavé work, the lot features one ear clip crafted as a pavé-set emerald and black diamond shield, centering upon a cushion-cut diamond, while its mate is a pavé-set diamond and black diamond shield, centering upon a cushion-cut emerald. Christie’s estimates the dazzling duo to fetch upwards of $350,000.
—April 2015 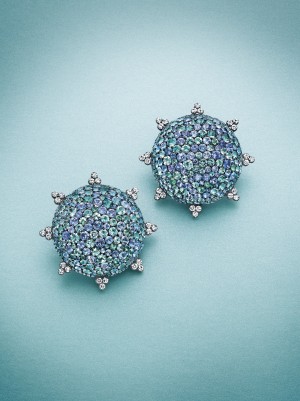 JAR’s pavé-set green and violet sapphire ear clips could draw a bid of up to $50,000 in New York.