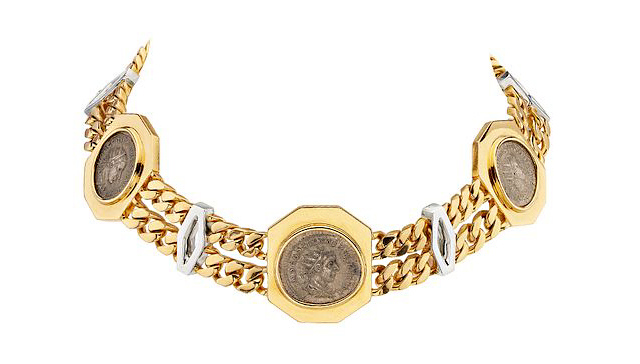 Bulgari evokes its past with a necklace that uses ancient Roman coins. Image courtesy Bulgari.

Bulgari pays tribute to its roots with “Bulgari & Rome: Eternal Inspiration,” a new exhibition opening at the luxury house’s flagship store on New York City’s Fifth Avenue on October 15. As part of the iconic display, the American Numismatic Society (ANS), an institute devoted to the study of coins, has loaned Bulgari 18 selections of rare ancient Roman coins, including a Gold Treveri Medallion from 293-294 CE and a second edition Nero bronze sestertius from 66-68 CE, with a portrait of Nero on one side and the Temple of Janus on the reverse. The featured jewelry includes Art Deco and classical pieces ranging from the 1930s to the present. Jewelry highlights include a bib necklace designed to evoke Via Appia, one of ancient Rome’s oldest and most important roads, and a two-toned necklace created with Roman Imperial silver-alloy coins. The exhibit runs until November 22.