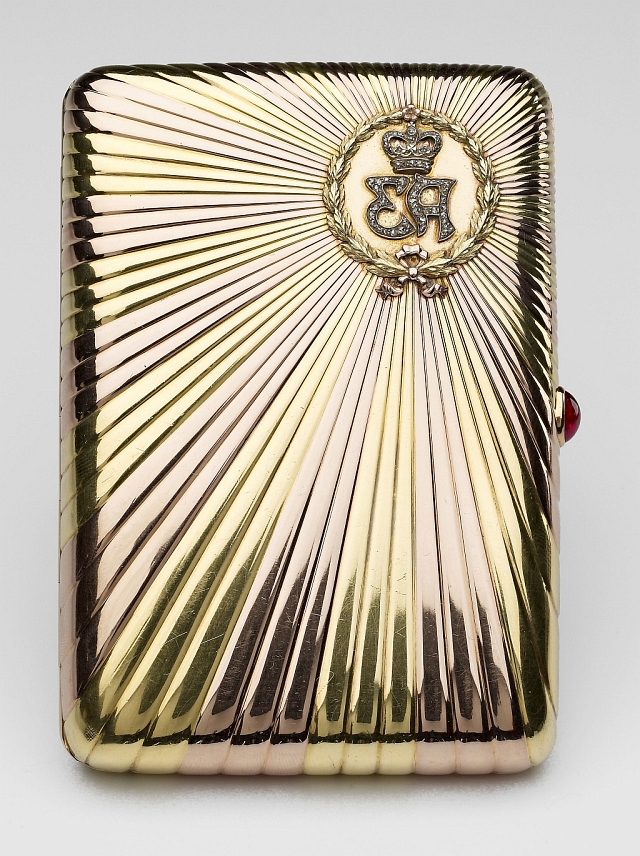 Part of the Gold exhibit at The Queen’s Gallery, Buckingham Palace, this Fabergé cigarette case is drawn from the exclusive Royal Collection. Photo courtesy The Royal Collection Trust and Her Majesty Queen Elizabeth II.

Imperial Russia’s favorite designer is sharing in the spotlight at Buckingham Palace. The upcoming Gold exhibit at The Queen’s Gallery will feature a Fabergé cigarette case dating back to 1903. Presented to King Edward VII on his 40th wedding anniversary by sister-in-law Marie Feodorovna, Dowager Empress of Russia, the rectangular piece honors Edward and his wife, Alexandra, with a diamond bedecked emblem. A cabochon ruby acts as a closure to the red, yellow, and white gold case. But Fabergé’s achievement is just one of 50 items showcasing the precious metal gold as an enduring symbol of stature at the London exhibit. With regal pieces hailing from around 1700-1500 BC and from around the globe, Gold is certain to impress visitors during its November 7 to February 22 run.