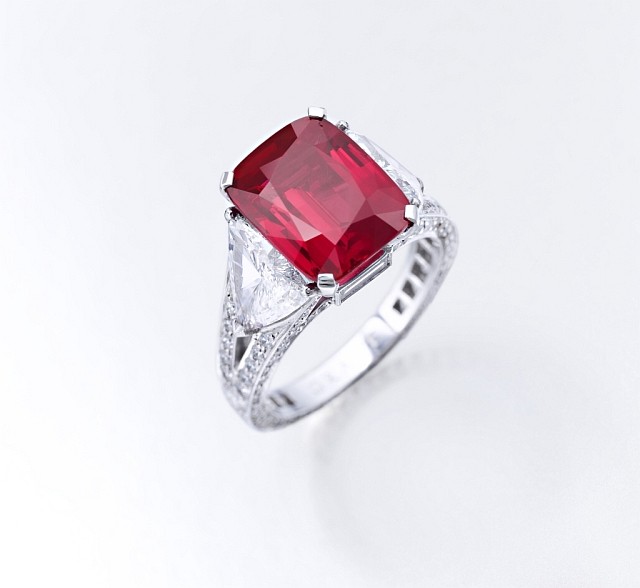 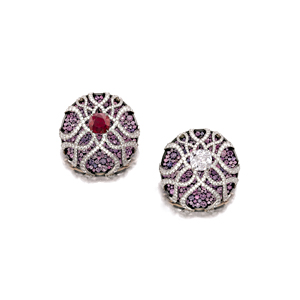 Collector Dimitri Mavrommatis is parting with a pair of JAR earrings which dazzle with sapphires ranging from light pink to purplish blue and lines of diamonds. One jewel is topped by a ruby weighing 4.89 carats, while the other is set with a 3.06-carat diamond.

Famed jeweler Laurence Graff knows a remarkable stone when he sees one — that’s precisely why he spent a then-record-breaking $3.6 million on an 8.62-carat Burmese ruby at auction in 2006. Now the stunning gem is back under the hammer and expected to set new records. Sotheby’s Geneva has the Graff Ruby — a moniker bestowed by previous owner Mr. Graff — listed as Lot 470 of its November 12 Magnificent Jewels and Noble Jewels sale. Pulled from the collection of art connoisseur Dimitri Mavrommatis, who purchased the ruby from Graff for an undisclosed amount in 2007, it is estimated to bring in a breathtaking $6.8 million to $9 million. The stone, which is renowned for possessing natural clarity and color, comes set between triangular diamond shoulders within a mount decorated with brilliant-cut diamonds and signed Graff. The showpiece joins other treasures from Mr. Mavrommatis’s vault, including unique baubles by elusive label JAR, as well as signed and period jewels, colored gemstones and diamonds from other elite sellers.