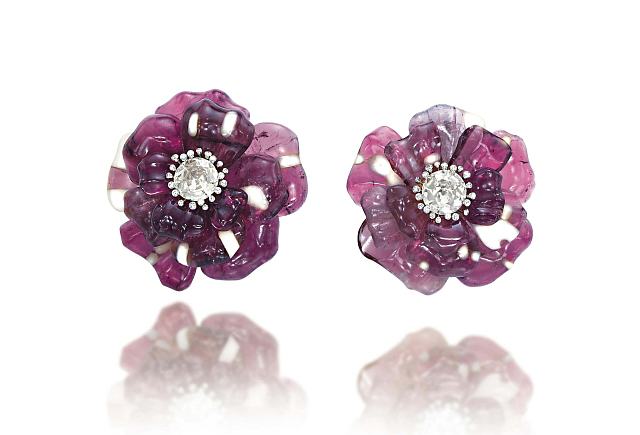 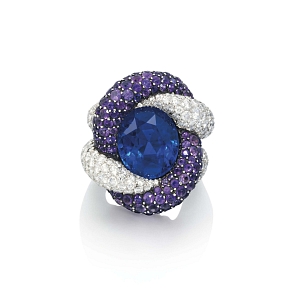 Spectacular diamond and amethyst cords hold an oval-shapped sapphire in this ring by JAR from 1988.

Expect the unexpected when JAR treasures hit the auction block. In November 2014, a gold, diamond, and green garnet bangle with a pre-sale high estimate of $290,000 at Christie’s Geneva achieved the second highest price ever at auction for a jewel by the elusive designer: $3,595,853. Now a repeat could be in store. Christie’s Geneva is offering four new JAR lots during its May 13 Magnificent Jewels sale. Among the rarities is an early example of the acclaimed artist’s work — a pair of tourmaline, agate, and diamond camellia brooches from 1985. Each designed as a sculptural flower, the pieces center upon a circular-cut diamond, bordered by delicate, brilliant-cut diamond pistols. In the Magnificent Jewels catalogue, they’re joined by a pair of ear clips, a ring, as well as a second brooch, by JAR. Combined, the JAR jewels are projected to bring in upwards of $1,260,267. But some expectations are meant to be broken.