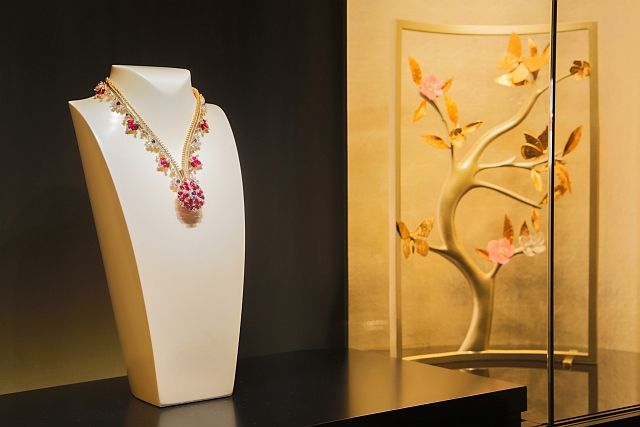 Nearly 65 years after Van Cleef & Arpels debuted its iconic Zip necklace, the design feat still astounds. Its latest incarnation: the magnificent Zip Conte de Fée. On view at the maison’s new Via Monte Napoleone boutique in Milan, the pink gold piece — which can be worn open as a necklace or zipped up into a bracelet — twinkles with diamonds, mauve sapphires, and 48 rubies. Like the rest of the fairy tale-inspired Peau d’Âne high jewelry collection from which it hails, the creation revisits the label’s favorite themes of romance and nature.

Since its March opening, the Milanese Van Cleef & Arpels outpost has made a habit of dazzling visitors. In addition to the Zip Conte de Fée, the two-story boutique is currently exhibiting 30 of the brand’s emblematic designs — from the first jewels to use their signature Mystery Setting technique to the game-changing Minaudière — until the end of May. The store is also the exclusive seller of a malachite and diamond Alhambra necklace and bracelet that were specially crafted in its honor.