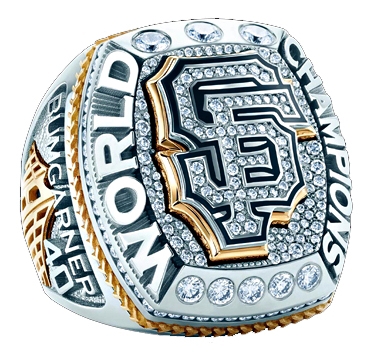 Bruce Bochy’s 2014 World Series championship ring is shown before the Giant’s game against the Arizona Diamondbacks on April 18. Photo courtesy of the San Francisco Giants.

For the third time in five years, Tiffany & Co. has designed the San Francisco Giants’ World Series rings. This year’s design is covered with a total of 200 diamonds. Each ring is personalized with the players’ names and numbers. The Golden Gate Bridge is on one side and the three World Series trophies are on the other side. The scores of the games are engraved inside the ring. The ring ceremony took place on April 18 ahead of the Giant’s win over the Arizona Diamondbacks. The sellout crowd was treated to the Scott McKenzie hit “San Francisco (Be Sure to Wear Flowers in Your Hair) by The Dick Bright Orchestra.