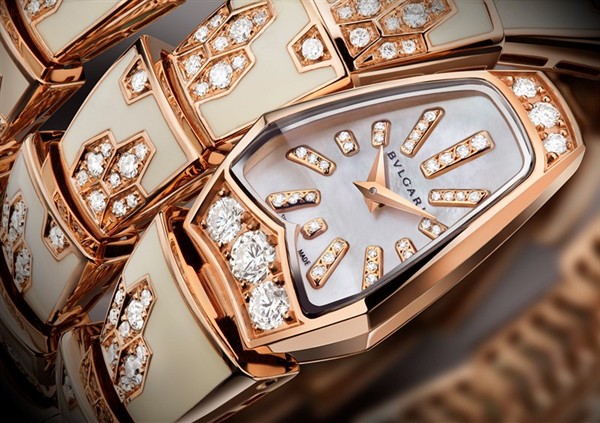 The Bulgari Serpenti watch, inspired by previous lines in Bulgari's divine past, features a serpent-like face and band.

Founded in 1884 by Greek jeweler Sotirios Voulgaris, the Bulgari name has surpassed its initial expectations to break ground in jewelry to also become a top name in original watches, stylish clothing, and even handbags and shoes. Today, the name Bulgari is synonymous with luxury and fine living, and harkens back to a rich history. This global company’s reputation for sumptuous refinement continues to create growth, and in the past six years, Bulgari’s popularity pushed it up the ladder of success to a new standing as the third largest luxury company in the world.

Bulgari’s Swiss subsidiary Bulgar Time S.A. creates the company’s timepieces. Each original piece is carefully designed and constructed. Founded in 1980, Bulgari Time’s headquarters is located in Neuchatel though some work occurs at its secondary site, La Chaux-de-Fonds. Today, sales of its watch line make up to 29% of the company’s sales. 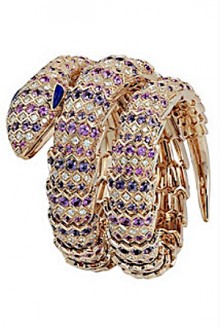 The Bulgari watch standard demands complicated watch movements and precision – all wrapped in fine metals. Bulgari watch features like a single, double or triple tourbillion, a perpetual calendar and second time zone attest to the excellent craftsmanship of the team that Bulgari has assembled.

In 1989, Bulgari tapped Gerald-Perregaux to be the company’s top supplier of its coveted watch movements. Despite a successful run, Bulgari decided to move the majority of its production in-house. This led to the purchase of Daniel Roth and Gerald Genta; both established producers of complicated timepieces before their acquisition by Bulgari.

When asked about the switch to in-house production, Francesco Trapani, CEO of Bulgari said, “We can thus say from this point of view that Bulgar is going forward, a true watchmaking manufacture in the sense that we produce our own movements, cases, dials and bracelets. I do want to emphasize, however, that by ‘manufacture’, which is an over-used term, I do not mean to imply that Bulgari wants to produce all of its movements, cases and bracelets in-house! Our goal was and remains to master the savoir-faire for a portion of our collection—the high-end and the very high-end. As I said earlier, we will continue to depend upon our suppliers, with whom we have good relationships, for some of these various components.”

In 2010, Bulgari made timekeeping history by developing and producing Calibre 168. This striking movement is the brand’s first self-winding base caliber. Calibre 168 gives a high level of torque through its oscillating, bi-directional weight and winding system. Determined to give watch owners optimal timing performance, Bulgari installed an instant jump central date indication.

These luxury timepieces stand up to daily wear well, though it is recommended that you have your Bulgari watch examined every four years by a Bulgari Watch Master. Certified Masters ought to perform routine maintenance tasks like mechanism calibration, crystal replacement or ultra sound cleaning.