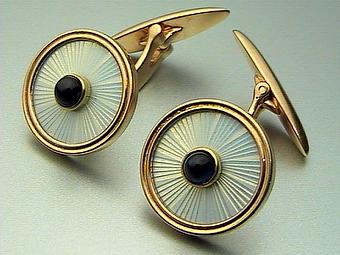 Fabergé gold, cabochon sapphire and guilloche enamel cufflinks by Henrik Wigstrom, made in St. Petersburg between 1908 and 1917. Photo courtesy of Romanov Russia.

The art of cufflinks lies in their subtlety, their nod to tradition, and their function as a form of self-expression.

They subtly combine fashion with function.

And almost every pair has a story to tell.

Uniquely positioned as prime agents of tradition, personal expression, and nuances of indulgence, cufflinks are the ultimate marker of how a small detail can go a long way. In some rare cases, they even spark a bit of controversy, as JPMorgan Chase’s CEO Jamie Dimon did this summer when he sported a pair of presidential cufflinks in public, setting off a stream of queries about his political alliances – and thusly, contributions – at a time when the company’s losses were stacking up to around $2 billion.

Nonetheless, they certainly have the power to help a man develop his own unique style.

Click to enlarge
Cufflinks from the 1900s like these were part of the dress code for first-class passengers of the Red Star, a ferry boat from Antwerp to New York. Photo courtesy of Guy-David Lambrechts, Antwerp.

“By the late Victorian era,” says Dave Mehlhoff, president of the International Cuff Link Association, “cufflinks and shirt studs were essential to every gentleman’s wardrobe.”

In the late 19th century, men began wearing onyx cufflinks when they wished to signal that they were in mourning. According to Guy-David Lambrechts, author of Antique Cufflinks 1860-1960, a married woman could not speak to a man wearing onyx cufflinks, which were then displayed on top of a man’s wrist. Once a man felt that his mourning period was concluded, he would switch to cufflinks made of gold with black enamel.

Then in 1910, “Faberge perfected (its) enameling technique and enamel cufflinks were the most prevalent style at the turn of last century,” says Mehlhoff. Such a technique involved firing enamel at temperatures around 1,000 degrees Fahrenheit to achieve a smooth, translucent finish.

In the early 20th century, cufflink trends shifted to smaller sizes. By the 1950s and 60s, according to Lambrechts, they became larger in size again, and began to reflect one’s personal and professional interests and acquisitions. BMW cufflinks, for example, were the marker of a BMW owner. Other cufflinks were produced as indicators of the times: Space- and globe-inspired cufflinks, for example, emerged in the 1960s to reflect the conversations and history-making expeditions of that time.

Pop culture also made its way into cufflinks expressions: Mehlhoff owns a matched set of cufflinks featuring each one of The Beatles. He had the opportunity to have them appraised by Peter Shemonsky, of Antiques Roadshow, who told him that the now-collector’s items once could be purchased out of bubble gum machines in England in the 1960s. The challenge, of course, was to obtain at least one of each of the four singers to complete the set. Likewise, Mehlhoff indicates that it is largely because of shows set in such iconic eras as the 1960s and early 20th century, such as Mad Men and Boardwalk Empire, that cufflinks appear to enjoy a seeming resurgence of popularity today—then again, there are those who will insist that cufflinks have always been popular.

Today, luxury houses appear to have evolved to encompass a wide variety of interests.

Cufflink connoisseur Longmire’s offerings feature an extreme creative range, from sterling silver skulls (complete with eye patches), to its signature enamel ladybug cufflinks, to classic hand-carved opal and gem sets. And uber-traditional Dunhill, known widely for its simplicity and elegance, offers sets that are not without their winks of whimsy: Black-lacquer bulldogs, sterling silver four-leaf clovers and azurite spinning globes fit in among its iconic diamond pattern cufflink sets.

While cultural trends and personal preferences will evolve with the fancies of each generation, the art of cufflinks will always lie in their ability to elicit an emotion, an engrossing conversation, or a nod to tradition.