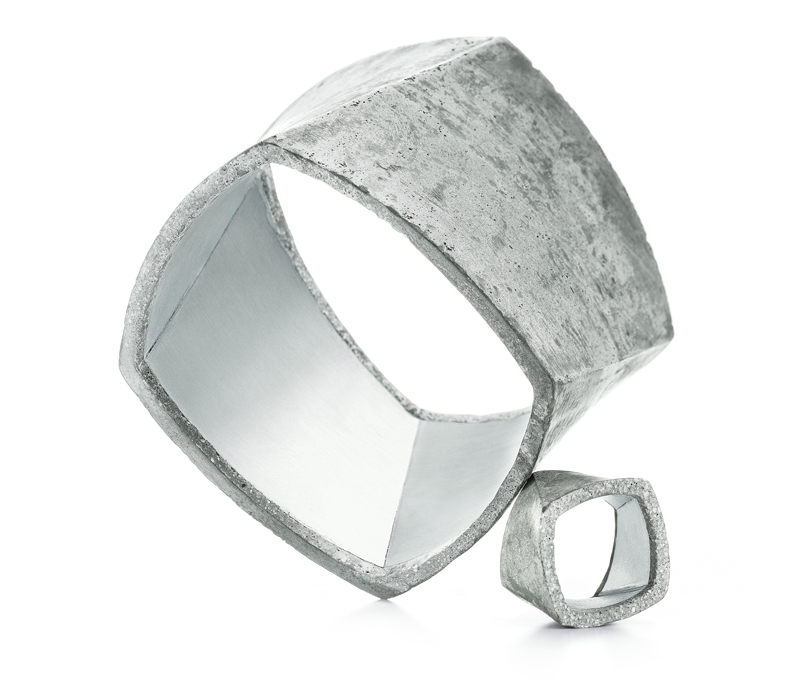 The concrete-like texture and use of angles and curves define this ring and bracelet as designed by Gehry.

An architect may not seem like a logical choice for a jewelry designer, but Frank Gehry has excelled at both. Gehry’s architecture is distinctive, daring and modern, as are the jewelry pieces he has designed for Tiffany & Co.

Gehry grew up and began his career in Southern California, deeply influenced by Bauhaus and modernism, and this is evident in all his designs. His most notable buildings include the Guggenheim Museums in Bilbao, Spain and Abu Dhabi, United Arab Emirates; the Walt Disney Concert Hall in Los Angeles; the Hollywood Bowl in Los Angeles; and the Stata Center at the Massachusetts Institute of Technology. In his long career, he has designed many other museums, office buildings and private houses.

Click to enlarge
Gehry used unconventional angles in his design for the Stata Center at MIT. Photo courtesy of Sxc.hu.

Gehry’s list of accolades and honors is long, and includes the Pritzker Architecture Prize – one of the top awards in the field of architecture – and the National Medal of Arts.

In 2006, he began designing for Tiffany & Co. His modern designs translate into chunky, bold pieces, featuring industrial textures and forms that range from sweeping curves to dramatic angles. Like his use of steel in his architecture, he uses the reflective qualities of gold and silver to bring movement to inanimate pieces of jewelry.

“I think of myself as an architect,” Gehry said at the jewelry line’s launch in 2006. “[Tiffany] took a chance.”

A silver cuff may have a finish that looks like concrete and angular edges that curve slightly to soften the overall look. While most of the pieces are in silver or gold – he uses both yellow and rose gold – a few feature diamonds, adding texture and sparkle to the pieces.

The architect designed earrings for tennis player Maria Sharapova for the U.S. Open in 2009. “I wanted to design earrings for Maria that were interesting yet light enough to wear during play,” Gehry said. “It was a new idea inspired by corrugations, like a river or a waterfall.” He designed another set of earrings for her for the 2011 Australian Open.

Actress Anjelica Huston said at the launch of the jewelry line: “I never thought of him as being a jewelry designer before, but it makes perfect sense because he has a great eye, an artist’s eye, and he loves beautiful shapes.”

Jewelry wasn’t Gehry’s first foray into design beyond buildings. In the early 1970s, he began a line of furniture, Easy Edges, made from corrugated cardboard and other nontraditional furniture materials. He has also designed a vodka bottle, a hockey trophy and watches for Fossil. He also designs tabletop items for Tiffany & Co., including vases, candle holders and statues.

“For me, architecture and design are about the process,” Gehry says. “Sketching and shaping three-dimensional models and conceptualizing different possibilities – this is the essence of creating, whether in architecture or jewelry. The impulse is always the same: To discover new forms that have a natural flow and a relevance to contemporary life.”