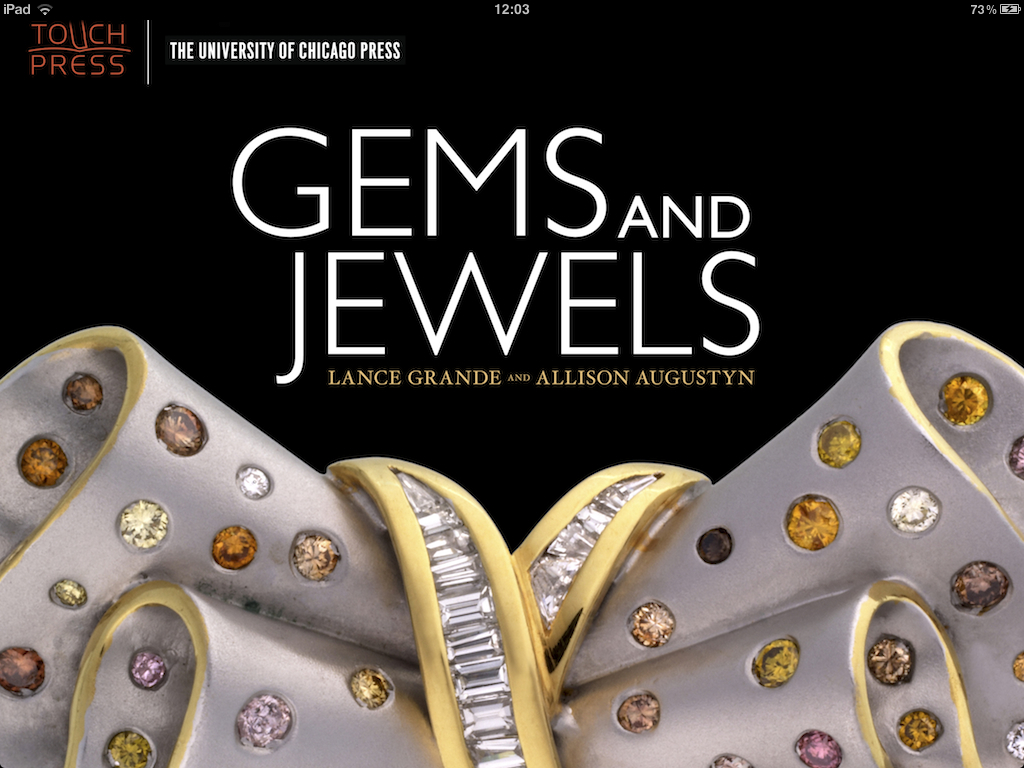 Launch the Gem and Jewels app for the iPad and the screen fills with sparkling, spinning images of the world’s true gemstones: emeralds, rubies, topaz, pearls, opals to name a few.

As you take in the breathtaking gems, you hear a tinkling—as if you are jiggling a cache of diamonds in the palm of your hand.

Gems and Jewels puts rare, priceless, breathtaking pieces at your fingertips. It gives users unparalleled access to the stunning items that reside in the Grainger Hall of Gems in The Field Museum in Chicago.

The app is based on the book Gems and Gemstones, written by Lance Grande and Allison Augustyn. Grande, senior vice president of the Field Museum and head of collections and research, is curator for the gem hall. He wrote the book in tandem with renovating and re-creating the exhibit.

The book and exhibit seem to be a natural for the iPad. But developing the app was a laborious project.

The University of Chicago Press got the ball rolling when it reached out to TouchPress, an app developer known for remarkable innovations for the iPad. TouchPress became famous when its app called The Elements was featured in commercials for the first iPad.

Click to enlarge
“Gems and Jewels.” The University of Chicago Press.

The app creators only wanted three-dimensional images. And that’s what they got using an unprecedented procedure.

From 5 p.m. until the early hours of the morning almost every day for four weeks, a team from the museum unmounted every piece in the exhibit so that a TouchPress photographer could get the images developers needed. Each item was placed on a rotating, specially lit table designed to take images of every side of every piece. The items were then remounted so that museum visitors’ experiences weren’t interrupted.

“That was the biggest budgetary process. The only way the insurance company would allow the objects to be taken out of their displays was under the watch of two armed guards,” Henry said.

The result gives iPad users a view of the objects that isn’t available at the exhibit.

“There’s such beauty in the sides that you don’t get to see at the museum,” Henry said.

Case in point: The Aztec “Sun-god,” a 35-carat white opal mined by the Aztecs in the 16th Century. Spin the piece around, and lovely flower and vine decorations are revealed on the back.

Turn “Ensenada,” a pendant set with an emerald-cut, 15.18-carat topaz, and you see how the scrolling gold winds around each side of the stone.

Another feature of the app that expands on the exhibit is the high-powered zoom. Because the photographs are high-resolution, users can zoom in and see detail that visitors don’t see at the Field Museum.

A 2,500-year-old gold, die-stamped necklace can be expanded until each bump in the gold is crystal clear. The natural imperfections in a 1,263-carat tanzanite crystal gemstone come into clear view with a pinch of the screen. Zooming in allows the eye to see each colorless diamond that makes up “Cumulus,” a pendant made with 21.73 carats of jewels.

Lance Grande, a lifelong scientist, says the app is targeted toward jewelry enthusiasts, but the information that ties the jewels to natural history is imbedded in it as well.

“I was surprised in a positive way at the interactivity,” he said.

One late addition was the “Life Size” button on the left side of each screen. Press and hold that button, and everything on the screen shrinks or grows to actual size.

Christie Henry says that button was created by TouchPress, and this is the first time it’s been used. “That’s the button everybody plays with because it’s so striking,” she said.

A less universally popular TouchPress feature is the “Song” button. Press that, and you hear Marilyn Monroe’s “Diamonds Are a Girl’s Best Friend.” Henry said the song hasn’t been a hit with the science community, but others likely find it cute. “You either love it or you don’t,” she said.

The single most striking element for Henry is the reach that the app provides.

“Some pieces are priceless, and here they are accessible. Some date back to the Spanish Inquisition and some are current, created by Tiffany & Co. It’s that continuity over time.”

Watch a video that shows some of the apps key features at The University of Chicago Press.