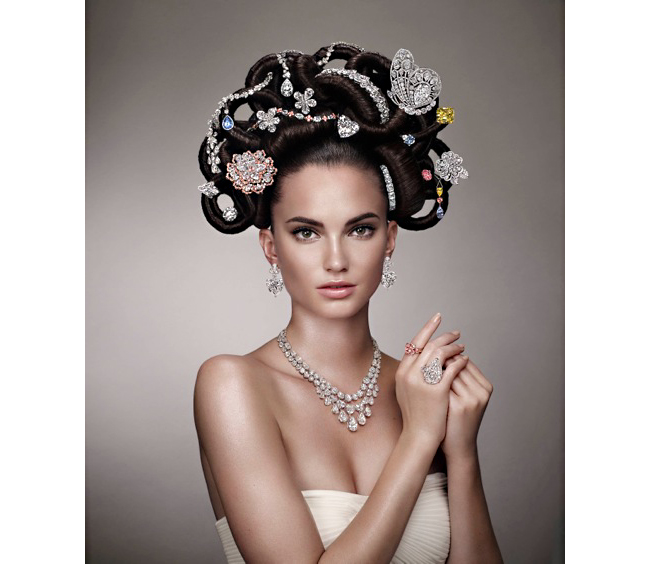 The re-creation of Hair & Jewel featuring 22 extremely rare and unique jewels with a value of half a billion dollars.

Claire Adler: Laurence Graff is expanding his watch division and celebrating 60 years in the diamond business with a staggering set of jewels and a jaw-dropping price tag to match

When I interviewed Laurence Graff in his London boardroom a few years back for a magazine article, the walls as ever adorned with a handful of his museum-worthy contemporary artworks, I found him surprisingly reserved and very cautious. Securing the meeting had been a feat in itself.

Between his homes in London, New York, Cap Ferrat in the south of France, Geneva and Gstaad, a yacht, private jet, a winery, vineyard and luxury resort and spa with panoramic views in Stellenbosch, South Africa, all combined with his supertight schedule, Graff is something of an international man of mystery. To jewellery industry insiders, Laurence Graff is a household name. A man whose passion for diamonds and for transforming the rarest of them into profit is legendary. Arguably more than any other fine jeweller in the world, Laurence Graff is responsible for epitomising the drama and mystery associated with diamonds—something for which jewellers ’round the world owe him a huge debt of gratitude.

When I asked Graff how old his youngest client was, he told me that a couple who were longstanding clients had recently contacted him asking him for a special pink, heart-shaped diamond for their three-month-old baby. “She’s my youngest client,” he said with some pride.

Graff and his clients are no strangers to bling and glamour in excess. With clients ranging from Donald Trump to David and Victoria Beckham and Middle Eastern royalty, Graff jewellery is routinely flown in and delivered by hand with bodyguards in tow.

Now, marking 60 years in the diamond business and his 40th boutique, Laurence Graff has recently announced that his company has created a jaw-dropping set of hair jewels called Hair & Jewel. Comprising 22 jewels, it is a recreation of a set of jewels first created in 1970 incorporating one million dollars of Graff diamonds. And the price tag for Hair & Jewel this time around? Half a billion dollars. Yes, really. You could call Graff’s latest creation jewellery theatre. I’d hazard a guess the price is beyond the reach of most kings and queens. What is noteworthy is that this staggering asking price officially takes jewellery to a price point way beyond the highest prices paid for works of art. In 2011 Cézanne’s The Card Players sold for a record-breaking (and eye-watering) $250 million.

Hair & Jewel is likely to emerge as the spectacular next chapter in Graff’s lifelong drama, though who will buy it only time will tell.

Graff spent the first seven years of his life in a single room in London’s East End, born to Eastern European immigrants who ran a tobacconist. Graff’s coffee table book, The Most Fabulous Diamonds in the World, documents how, aged 15 in 1960, he was sacked after three months at his first apprenticeship, where his duties included going out to buy sandwiches for the workers. At 17, making stars of David in his free time at a bench in his parent’s house to sell to friends, Laurence Graff could probably never have imagined that he would open 40 stores spanning Moscow, Geneva, London, New York, Monaco, Gstaad, Dubai and Shanghai; own cutting and polishing operations in Johannesburg, Antwerp, Mauritius and New York; own a stake in a major South African diamond mine, and receive four awards from the Queen of England for his entrepreneurship. Graff would also become the first company in the diamond industry to be vertically integrated—able to take a diamond all the way from acquiring it in the rough through to selling it in its own branded boutiques.

In 1974 Graff opened his first major retail store in Knightsbridge where he began welcoming clients from the Middle East enriched by the oil boom. When Saudi princesses visiting London returned from their Mayfair shopping trips, they would change into their new clothes in Graff’s office. One day, Saudi Prince Turki bin Abdul Aziz walked in unannounced and bought out the entire shop, including a 14-carat diamond.

In 1987 the most successful auction of all time took place at Sotheby’s in Geneva. Total sales at that auction reached $50 million. Amongst the pieces Graff acquired  at that sale was the most historic and sentimental piece of all – the Duchess of Windsor’s 19 carat emerald engagement ring. “I’ve got the original jeweller’s invoice which was made out to ‘The King’,” Graff was quoted as saying at the time. He gave the ring to his wife Anne Marie for their 25th wedding anniversary.

During the height of recession in December 2008 at Christie’s London, Graff bought the historic, deep grayish-blue, 35.56 carat, Wittelsbach Diamond for a record-breaking price of £16.4 million.

Today, the vast majority of Graff’s jewellery production takes place in Graff’s headquarters in two adjacent 18th century townhouses in London’s luxury district of Mayfair. Amid tight security, diamond setters and polishers are surrounded by the most advanced laser welding machines on the market and top quality Leica microscopes sit in an airy, spotless room. 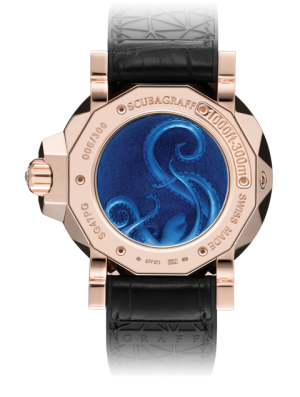 The ScubaGraff marks a new direction for Graff.

Meanwhile Graff is currently working to expand its watches division. A collection of diamond and emerald-encrusted watches inspired by the facets of a perfectly cut round diamond includes the MasterGraff Ultra Flat Tourbillon made in a limited edition of 50 and the ScubaGraff, a wristwatch and a functional piece of diving equipment thanks to its 100 metre water resistance, decompression valve, 20 minute countdown timer and optional enamelled octopus motif.

After 60 years, Laurence Graff is clearly still set on growing his empire even further. “We’ve doubled our clientèle by introducing watches. We can sell to men,” smiles CEO of Graff Watches, Michel Pitteloud. “Watches currently represent five per cent of the business, but as soon as we hit 10 per cent, we will be a significant player in the Swiss watch industry,” he says.