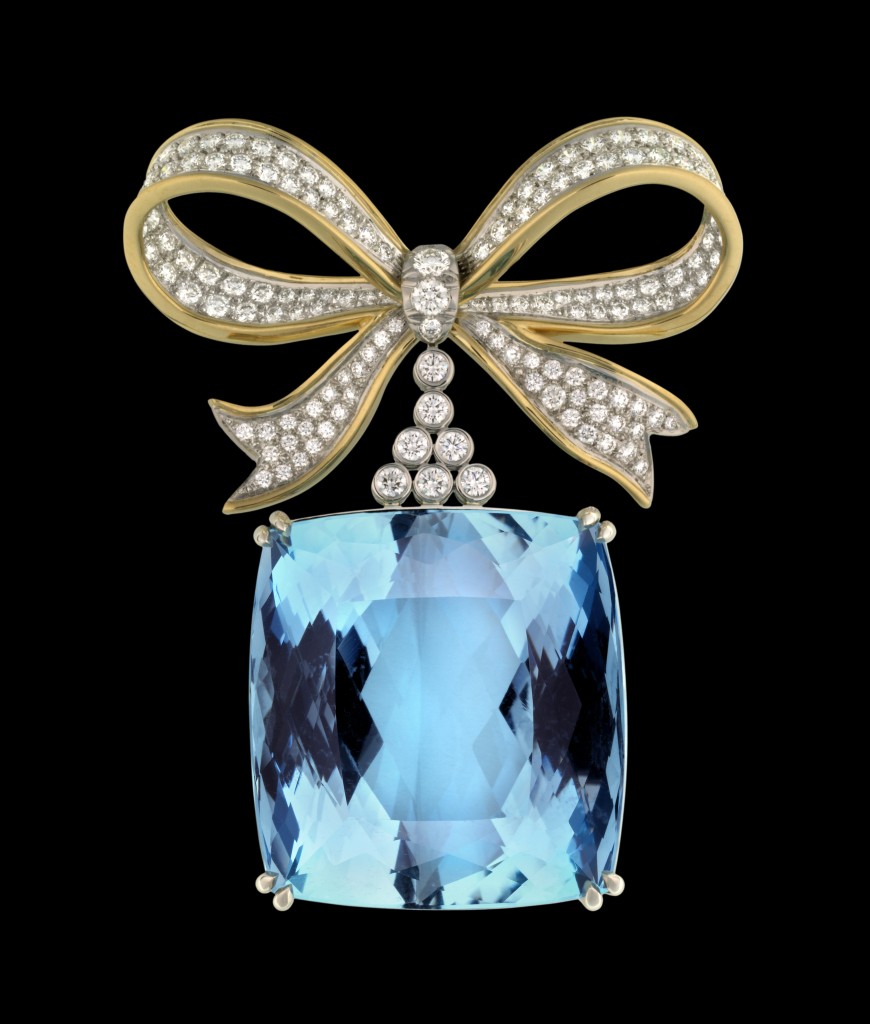 This design by Jean Schulmberger for Tiffany & Co., features an aquamarine that was part of the Tiffany collection of gems displayed at the World’s Fair in 1893. It has been in the museum’s gem collection since. Photo courtesy of the Field Museum.

In their natural state, gemstones might not turn heads.

Cut and shine them, and they start to catch your eye.

Put the gems in the hands of some of the world’s most accomplished jewelry designers, and now they are breathtaking.

Visitors to the Grainger Hall of Gems in the Field Museum in Chicago get to see the evolution from natural gemstone to exquisite jewelry up close.

Lance Grande, senior vice president of the museum and head of collections and research, is the curator for the gem hall and author of Gems & Gemstones, a book created in tandem with the recent renovation of the exhibit.

A full-time scientist for many years, Grande approached the book and exhibit from a scientific point of view. Gemstones, like animals and plants, have species and varieties, which means tiny variations in chemical composition can be the difference between an aquamarine and an emerald, for example. By grouping species and varieties, he structured the exhibit so that those close relationships would be clear.

Grande’s mission is to bridge the gap between scientists, gemologists and jewelers, to explore the natural history as well as the craftsmanship that is required to turn minerals into masterpieces.

“My objective was to tie the natural beauty—they are quite lovely—together with human artistry,” he said. “It kind of made it a little different” than other gemstone collections.

To achieve the vision, Grande took stock of the pieces the museum already had in the collection, which has been on display in some form or another since 1921. Grande then set about filling in gaps, always working to achieve the trio of evolution—gemstone to gem to jewelry.

To fill in gaps in which the museum had gems but not jewelry, Grande turned to local artisans and leaders in the industry. He was surprised by the response: Jewelry-makers from large to small wanted to create pieces for the exhibit.

“People jumped at it. It was something that was a once-in-a-lifetime opportunity for them, too,” Grande said.

Designing for Tiffany & Co., Jean Schlumberger created a stunning piece called “The Schlumberger Bow” with an aquamarine provided by the museum. The square-cut 148.5-carat gem appears to hang from a bow made of gold and platinum that is adorned with white diamonds.

Grande didn’t limit the jewelers he approached. In fact, one day on his way home from work, he ducked into Oak Park Jewelers in Chicago to ask for a favor. Grande had a collection of pink sapphires in different shades and thought putting them all on a necklace would be a powerful way to display them. He introduced himself and asked if the jeweler would be interested in using the gems to create a piece for the museum. The result: “Danielle Rose,” a white gold necklace that features layers of teardrop-shaped loops adorned with four colorless and 29 pink sapphires. 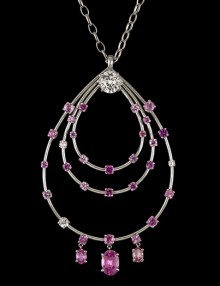 Along with the works created specifically for the exhibit, the Grainger Hall houses historic pieces from Tiffany & Co. that were displayed at the Chicago World’s Fair in 1893 and record-setting stones, such as the “Chalmers Topaz,” one of the largest faceted Topaz gems in the world. At 5,889.5 carats, the gem measures more than 5 inches tall.

In all, the hall contains 600 gemstones and gems and 150 pieces of magnificent jewelry, and Grande continues to seek items to add.

“I would still love to acquire some natural colored diamonds: Blue, red—pink would be nice, too, in the 3- to 4-carat range so they display well.”

In the next few years, Grande hopes to install additional pieces that have been donated. In the meantime, Grande most enjoys taking people through the exhibit and seeing them get excited. He says about 3,000 to 4,000 people go through the hall each day, and he has one primary hope for their experience.

“When people walk out of the exhibit, if they’ve learned one thing, that’s a good thing.”

Gems and Gemstones by Lance Grande and Allison Augustyn

Gems and Jewels app for the iPad: Based on Gems and Gemstones by Lance Grande and Allison Augustyn