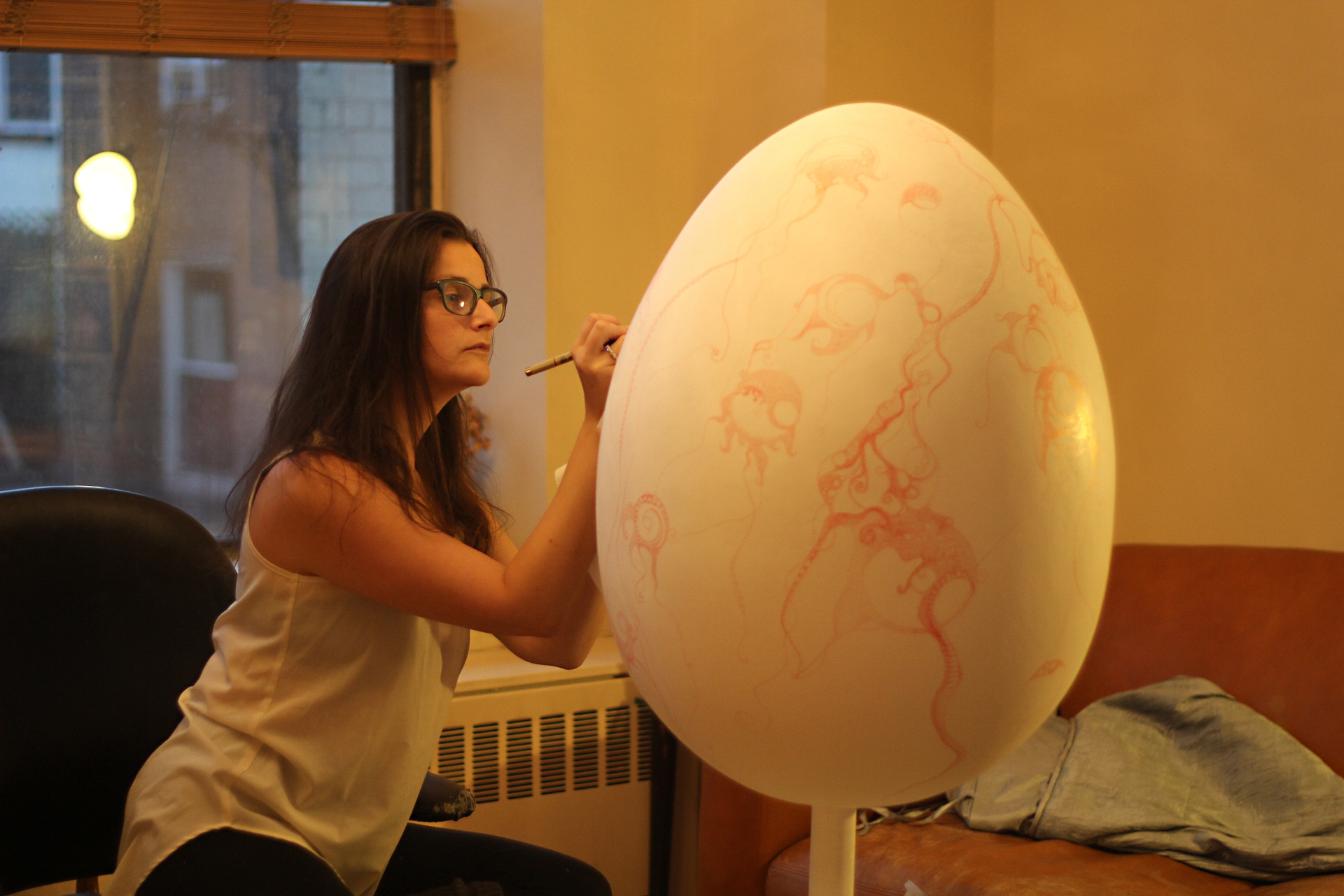 On April 1, Fabergé launched the New York City Fabergé Big Egg Hunt, a much-anticipated month-long event. Sponsored by Fabergé and let by its marketing team, the event was timed with perfect precision. Even the artists didn’t know where their egg was hidden until it was “discovered” by the public.

On the day of the launch, Brooklyn-based artist Rachel Goldsmith took a walk through the city. From Rockefeller Center (where ten eggs are on display), to Soho, to midtown (where Goldsmith’s own contribution, “Ova Obsessive,” was hidden), she took note of people’s reactions when they came across an egg. Tourists were least impressed, as if they were prepared to see just about anything in New York City. But the bankers, lawyers, stockbrokers and thousands of office workers who have begun encountering large egg sculptures around their Manhattan office buildings had a different response.

“When you’re in the middle of a work day, people are on a mission with blinders on,” says Goldsmith. “And this stops them in their tracks. They notice what’s around them. The eggs are really transforming the way people are living their day because it’s stopping them short.”

“The buzz is crazy,” she adds. “If I didn’t know this was happening, I might think it was a joke. There is a really cool, surprise aspect to it all. The water cooler talk was about the eggs all over the city.”

As an artist, Goldsmith is always observing. She hopes others can also be inspired to notice the small details of daily life. 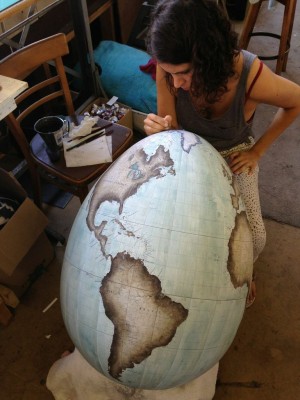 Many takes on an egg

One of the defining characteristics of the Fabergé Big Egg Hunt is the singular vision of each of the more than 250 individual artists that somehow works together to create a unified statement of art in 2014. The eggs are bold, colorful, funky, and pastel. Some are minimalist. Others have elaborate decorations. They are feathered, plastered and bejewelled. Some are storybook characters. Others open to reveal exquisite treasures inside. Goldsmith’s original vision for her egg was black and white. The curators loved her idea, but asked if it could be done in color. Aside from that, the team gave her complete artistic freedom.

London-based globemaker Bellerby & Co. created a complete hand-painted globe on an axis for the event. 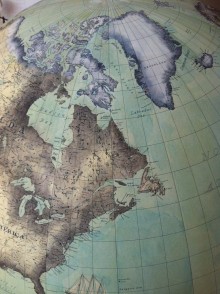 This is Bellerby’s second creation for the Fabergé Big Egg Hunt; the company also participated in a 2012 Fabergé Big Egg Hunt held in London. Every thing about the intricately designed egg globe says precision and quality. Maps were initially printed and then hand-painted with watercolors by resident artist Isis Linguanotto. Peter Bellerby says, “Everything we do is handmade. There’s no point in taking shortcuts.” The Bellerby look is unmistakable and adds a fun twist to the traditional globe.

DeMonte says one thing she found exciting about the Fabergé Big Egg Hunt is that it’s not elitist, but it raises awareness for art. And it’s fun.

DeMonte’s good-luck egg reflects what she’s most passionate about. “All my work is about women’s issues, hopefully with a sense of humor,” she said. “My egg is a good-luck egg. It’s all about destiny and fate; how we create our luck.”

Symbols of luck, both good and bad, are the focus of DaMonte’s exhibition La Forza del Destino (“The Power of Fate”), opening April 10 at June Kelly Gallery in New York.

In spite of the stylistic differences between Bellerby, DeMonte, and Goldsmith, their processes certainly share commonalities. Each artist spent months of painstaking work as they brought their visions to fruition. Bellerby said it took them seven to eight months to create its piece, but the time was well worth it. “It was really lovely to be able to make it properly,” he said. “It’s wonderful to be part of the event.”

Goldsmith compared her process to acrobatics. “The positions I had to get into to draw on this egg were insane,” she said. “My whole body was in pain.” She adds that the complex patterns of dots in metallic ink make the sculpture nearly impossible to photograph because the dots change depending on the light. 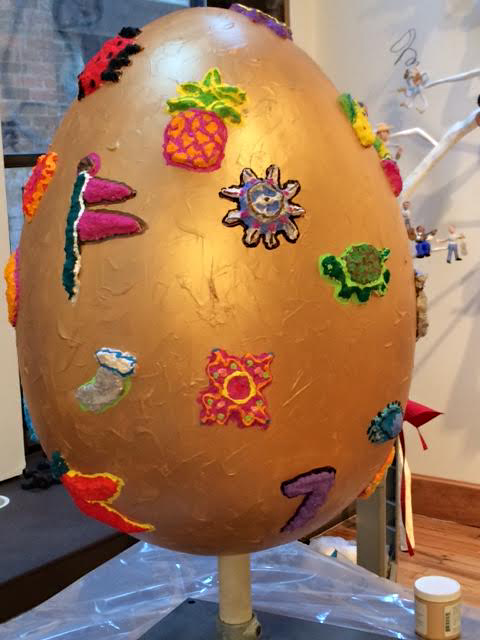 Meaning behind the eggs

All three artists also share a commitment to social change. DeMonte is deeply involved with Studio in a School, which provides art programs to New York City children in under-served schools, day cares, and communities. Studio in a School, along with Elephant Family, will be receiving all the proceeds from auctioning the eggs. Bellerby and Co. actively supports Elephant Family, and Goldsmith, a former middle-school teacher, spoke of the importance of encouraging children in art.

In spite of the innovative and often postmodern designs of this year’s eggs, the feeling of carrying on a tradition remains.

DeMonte remembers visiting the Forbes Fabergé exhibit on Fifth Avenue years ago when she was growing up. “I don’t know anyone who sees a Fabergé egg and isn’t in awe. The surprise element, the craft element of the eggs, just blows everyone away.”

Easter eggs indeed behold a certain magic, a whimsy that invites one to slow down, take in the sites, and breathe in the sheer beauty of these creations—and by extension, the landscape they inhabit.

“Art makes me happy. That’s the most important part,” says Goldsmith. “It’s such an important part of life. There is emotion driving artwork, but it doesn’t have to be negative emotion.”

Keep up with the latest developments

Bidding has already begun on these collectible egg sculptures, and will continue until April 26. Each egg starts at $500. Bidding is available online through Faberge’s contemporary auction partner, Paddle8.

Looking for the latest updates? A Fabergé app specially designed for the occasion can even be used to help locate the eggs and to assist entrants in following the event’s progress on social media. You can also follow Goldsmith at @ArtistRachelG, Bellerby & Co. at @globemakers, and DeMonte at @ClaudieDeMonte.

Jordan Clary is a freelance writer who writes about gemstones and jewelry. Her e-book From Mine to Market: Asia Gemstone Travel is available on Amazon for 99 cents for a limited time.