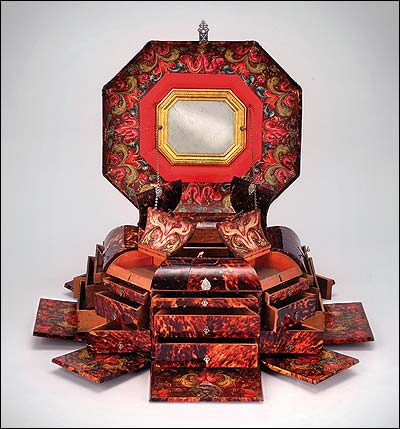 Queen Elizabeth II of England presented a jewelry chest or casket to Colonial Williamsburg during her 1957 visit for the 350th anniversary of Jamestown. The octagonal box is 14½ inches high, 25½ inches wide and 23½ inches deep. Currently, it is on display at the DeWitt Wallace Decorative Arts Museum to commemorate Her Majesty’s return visit to Williamsburg in 2007 and America’s 400th Anniversary of the first permanent English settlement in the Americas. Colonial Williamsburg photo.

Royals like the 16th century English monarch Henry Tudor knew how to employ gifts to woo potential love interests. From the jewel’s presentation to the moment of the big reveal, jewelry artisans fulfilled the king’s desires, focusing details not only on the jewel but also the box it came in. Often made from elaborately worked metal, like the 16th century Nurembourg jewelry box, these items also served a practical function as well. Jewel-encrusted boxes with velvet or leather-lined interiors became airtight containers that shielded gems from palace dirt and grime.

Jewelry boxes of antiquity and today’s examples have had many incarnations and taken many shapes. Besides the basic rectangular box, jewel owners also commissioned craftsmen for jewel caskets, egg, circular and heart-shaped boxes. Even unusual objects, like a treasured French jewelry casket in an artistic, helmet shape (circa 1860) can double as storage units.

During the 18th century, jewelry boxes served as a sign of royal authority and wealth. In one version of the Grimms’ fairy tale Snow White, the story’s antagonist, the Fairest Queen of All, orders her faithful huntsman to deliver Snow White’s heart to her—in a jewelry box. This gory detail still gives readers a chill today.

A historic attraction and American landmark, Colonial Williamsburg in Virginia received a jewelry box treasure from British Queen Elizabeth II in 1957. The octangular box has a lifting lid with a beveled mirror and dozens of tiny drawers. The box was offered in recognition of Jamestown’s 350th anniversary.

Musical jewelry boxes re-emerged during this century with new musical technology that gave listeners clearer, crisper notes, even whole songs.  The first examples were produced in 1502. Swiss watchmaker Antoine Favre introduced his cylinder-driven box in 1796, expanding their popularity immensely. Boxes contained tiny drums, tinkling bells and metal combs that created musical sounds when the box opened or if the screw was wound.

People amassing larger jewelry collections sometimes chose to consolidate and store their items in a single piece of furniture known as a jewelry armoire. Often made from wood and highly decorative, jewelry armoires became integral components of private dressing rooms and bedrooms. Like today’s smaller versions, armoires could have multiple drawers, even hidden ones.

During the Industrial Revolution, the mass production of furniture made access to these jewelry box treasures easier for everyone. In modern times, many consumers seek more personalized pieces with specific features like gold-edged, ebony inlays and an engraved plaque. Luxury craftsmen like Steinhausen offer Old World details with special features such as personalized, engraved plates for their watch and jewelry boxes.

Not to be outdone, Forzieri Italia uses unusual materials to make some of the world’s most upscale jewelry boxes. One such box is made from python skin and houses an inner sanctum of suede lining. Each box looks slightly different because of the varying patterns in the animal skin but each receives special attention during the creation process. Forzieri Italia also makes game, pen and traveling jewelry boxes.

The jewel box has protected some of history’s finest examples of premium jewelry and continues to be an important part of our lives today.