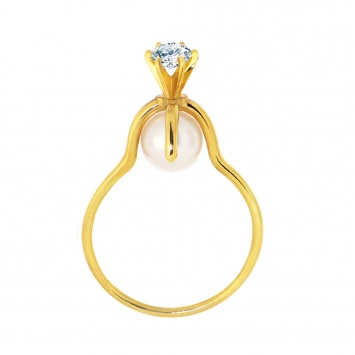 Mad Men lures its viewer into the stylish past with its bustling New York scenery, a bird’s eye view into the culture of the 1960s and a snapshot of the gritty side of American advertising. This hugely popular drama weaves its many storylines around suave ad men like Don Draper, using vintage music, ironic dialogue, and the unexpected plot twist. Thrown into the mix, much to follower’s satisfaction, are obvious examples of the show’s retro fashion sense. After all, because Mad Men story lines often depict the rise and fall of marriages, many characters must reveal oversized, glittering cocktail rings.

Emmy Award-winning show stylist Janie Bryant, a graduate of Georgia State University, puts her international design experience to good use dressing the stars of the show. In a 2011 interview, Bryant says that she looks for three details for rings: “gorgeous, colorful, and large.” She raids vintage stores in Los Angeles seeking inspiration, and then she works with vendors to create the perfect piece of jewelry.

One of those exclusive vendors is contemporary Italian jewelry designer Arosha Taglia. Taglia revives past styles but successfully evolves them with the latest technologies and some modern inspirations. Taglia’s ’60s-inspired jewelry, like the Crown Diamond Pearl Engagement Ring in 14K White Gold (above), is a star in its own right. Fans of Mad Men will have seen this show-stopping ring on the hand of the Mad Men’s voluptuous, sex-goddess character Joan Harris (played by Christina Hendricks). The thin band of gold holds a pearl that rolls freely against your skin. Topped off with a crown of a 0.25-carat diamond, this piece makes an elegant engagement ring for anyone.

When Mad Men celebs step out, they don’t leave their ’60s fashion sense behind. Hendricks was recently seen walking the red carpet wearing an 18-karat Yellow Gold Gardenia Ring from Carrera y Carrera. This opulent ring features large, folded leaves of gold with a delicately polished pearl nestled in the center of the flower. They are true to the time period, as pearls feature largely in the show’s wardrobe design. Carrera also designed a silver ring with the same design and matching necklaces.

Carrera y Carrera has boutiques around the world including Tokyo, Madrid, Moscow and Dubai. The company focuses on carving its fine gold rather than simply molding it. Carrera pairs its carved creations with treated stones from mines around the world. Carrera, like Tiffany and Company, gives each piece its own identifying serial number. Serial numbers provide information about the jewels used and their history and also certifies authenticity. A serial number makes tracking these details easier for the luxury owner.

While viewers of Mad Men anxiously await the evolution of Don Draper’s love life, they might be thrilled by the ring choices of its actors and actresses. While style-watchers gain a peek into the past, these vintage styles also continue to direct the design currents of today’s trends.