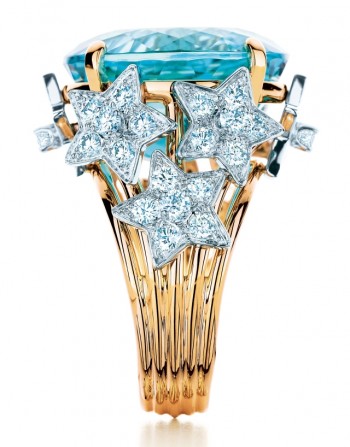 The right-hand ring, for example, is emerging as symbol of empowerment for women

Wedding rings, with their 4,000-year history, symbolize marriage and everlasting love. Other rings also bring with them their own special meanings.

An eternity band, which has stones around the entire band, symbolizes eternal love. Like true love, it has no beginning and no end. While some women wear it as a wedding band, others might wear it alongside a wedding band and an engagement ring. Some husbands give the band as a first anniversary gift. Because the eternity ring also symbolizes the circle of life, it’s an appropriate gift for the birth of a child. “The most important rule of thumb is that the eternity band should not overwhelm or detract from the engagement ring – it should complement it,” says Steven Fina, vice president of New York jeweler Michael C. Fina.

Diamonds are the traditional choice for an eternity ring, in either a channel or prong setting. “For women who want to add a pop of color, sapphires are an excellent choice because they come in many different colors (not just blue and pink) and they are harder than other gems (like emeralds), so they can handle daily wear,” notes Fina. Traditional wedding set jewelers such as Cartier and Tiffany & Co. also offer eternity bands to coordinate with their wedding sets. Most jewelers will also make a custom eternity band, with high-quality diamonds or gemstones.

An anniversary band celebrates the years spent together. A classic anniversary band is a five- or seven-stone diamond ring. Some stones are meant to represent the woman, her husband, and their children, although this isn’t a requirement. Stackable rings might also serve as anniversary rings. “Stackable rings are an easy way to mark all occasions in your life. There is always a ring for everyone,” says Fina. “When you look down at your hand and the rings, you can constantly be reminded of these occasions and the memories they mark.”

A right-hand ring is a symbol of the woman herself. It should reflect her taste and her status. “The choice of style – for example delicate and floral or strong, angular and even spiky – makes a personal statement apparent to everyone who sees the ring,” says Cynthia Sliwa, a certified professional image consultant in the Los Angeles area and co-author of the book Jewelry Savvy: What Every Jewelry Wearer Should Know. A custom-made ring by a favorite designer brings the personal touch to the next level. A right-hand ring might feature a vibrant, stunning gemstone such as a diamond, an emerald or a sapphire. The rings can be whimsical, classical, delicate or modern; whatever reflects the personality of the wearer. Harry Winston, Fabergé and Van Cleef & Arpels all carry stunning right-hand rings. As Fine says, “The right-hand ring is a symbol of empowerment for many women, so it should make them feel like they own the world.”