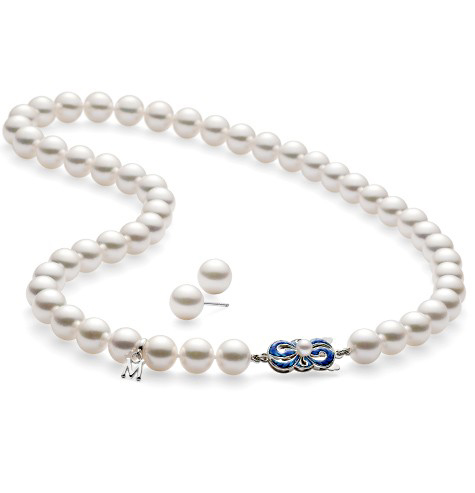 The classic strand of akoya for which Mikimoto earned its reputation is still a mainstay of the collection. Photo courtesy of Mikimoto.

The highly regarded Japanese brand has a high standard of quality and a recent collaboration with an unexpected partner.

Only a few top luxury brands have names that are practically synonymous with pearls.

Mikimoto is one of them.

Often referred to as the “father” of the modern-day pearl industry, Mikimoto Kokichi is credited with developing the mariculture process of inserting a nucleus into an akoya oyster to encourage a pearl to grow. This culturing process forever changed the way society looked at pearls. No longer were round, lustrous pearls a mystery of nature. They could now be mass-produced. 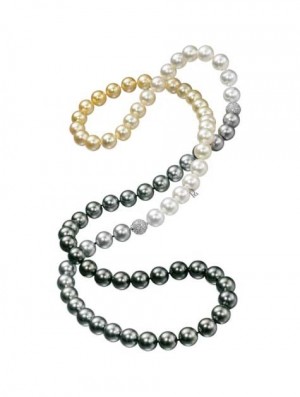 A recent trend in pearls is to combine akoya and South Sea pearls to create a gradient effect. Photo courtesy of Mikimoto.

The origins of cultured pearls

Whether or not Mikimoto actually “discovered” spherical pearl culturization has been debated, but what isn’t questioned is his influence on the pearl industry. He devoted his life to discovering new and better means of cultivating pearls and, especially, to marketing them. Mikimoto was the first Japanese luxury brand to achieve international prominence and it continues to set the standard for luxury pearls.

Only the top five percent of pearls harvested each year are considered worthy of the Mikimoto label. Of those five percent, even fewer are given AAA grades, the highest grade possible in terms of luster, shape, size, and color.

During the early part of the 20th century, Mikimoto’s biggest challenge was to get the public to accept cultured pearls as “real.” It was a formidable task. The way pearls formed in the wild was still a mystery to most consumers, and the idea that pearls could be deliberately grown in oysters was not readily accepted. Misperceptions about cultured pearls continued even after his death in 1954. But today very few would argue his mission was a success.

“He’s the one who made the cultured pearl acceptable to the consumer.”

Salvatti recounted how her mother, a former fashion model, used to sit her down to watch the runway shows on TV once or twice a year. She said, “I can remember her telling me, ‘You don’t ever want cultured pearls. They’re fake.’ ”

Mikimoto devoted his life to changing this image. Today, many people like Salvatti make a living on pearls.

“There was so much misunderstanding about cultured pearls,” says India Rows, a GIA certified pearl grader who travels the world visiting both saltwater and freshwater pearl farms. “Mikimoto was a wonderful entrepreneur. Here were these beautiful, cultured pearls. No one could believe they were real. You have to admire him because he revolutionized pearls. He shook things up.” 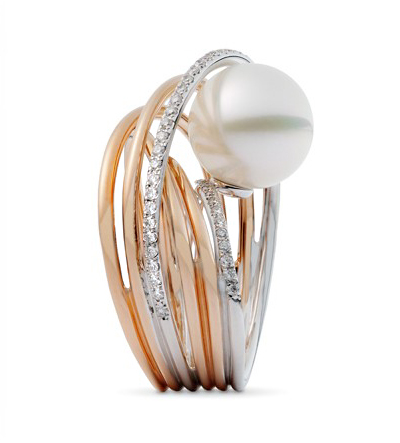 This ring uses a South Sea Pearl pearl with diamond accents for an elegant look. Photo courtesy of Mikimoto.

Today, the pearl industry is a dynamic arena with pearls emerging from pearl farms all over the world. Australia is probably the leader in saltwater South Sea pearls. China is experimenting with akoyas. Sea of Cortez pearls in Mexico produce stunning, slivery dark pearls. And freshwater pearls are flooding the market as pearl farmers experiment with new techniques to create unusual shapes and sizes. Advancements in color techniques have brought us pearls in nearly every color on the spectrum.

“If you were to compare a pearl strand from Mikimoto with another, you’ll find the luster and the quality is just not the same. There is definitely a difference,” says Belinda Fang, senior manager of public relations and promotions at Mikimoto America. “Some designers try to cover up imperfections with the metal. That allows some wiggle room. For us, you have to be able to see the pearl from every angle. We really believe in presenting the customer with pearls that truly are the best in nature we’re able to find. We’d rather not have as much inventory than have pearls that are blemished.”

While the classic strand of white akoyas so readily associated with the Mikimoto brand is still a mainstay, the line is also expanding to meet the needs of today’s consumers, who tend to be more savvy and educated than in the past.

“I’m noticing our customers are interested in learning more what makes these pearls so rare and so coveted,” says Fang. “There is more interest in not just going for the biggest—but the highest quality—strand. It’s really for the pearl connoisseur, the person who can really appreciate how rare it is to come across a pearl of such high quality.”

Baroque pearls are also experiencing a Renaissance of sorts. Fang said, “In the past people didn’t always gravitate toward baroques. With baroque pearls, Mikimoto deems an even smaller percentage useful. When we look for baroques, we’re looking for really beautiful shapes.” 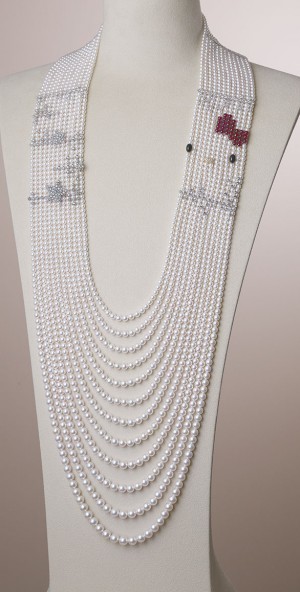 Mikimoto has recently collaborated with Sanrio’s Hello Kitty, which has a fan base that runs in the millions. The project integrates Mikimoto’s lustrous pearls with the whimsical Hello Kitty brand for a luxury collection that a Sanrio representative said, “joins histories and aesthetics of both brands.” The theme for the 40th year anniversary of Hello Kitty is ‘Mikimoto beautiful harmony’ and includes a 20-piece collection with Kitty-themed necklaces, bracelets and earrings.

Sanrio’s representative says the idea for the collaboration came from a desire to combine two global brands “originating in Japan in order to promote the beauty of Japan to people around the world.”

The collection had its debut in January at Mikimoto’s main store in Ginza, Tokyo, and at Colette in Paris. It is currently being launched in shops worldwide.

Looking to the future

Probably the most repeated quote from Mikimoto is his dream “to adorn the necks of all women around the world with pearls.”

He has nearly succeeded.

New designs continue to emerge, broadening the appeal of pearls to more and more women. One trend is a move away from the traditional strand of white pearls to a more more an umber trend. Fang said, “Customers are looking for something more modern. Some strands might combine akoya with South Sea pearls and slowly move into a color palette of silvers, grays, black and gold. So in one strand you can have representation of all colors.”