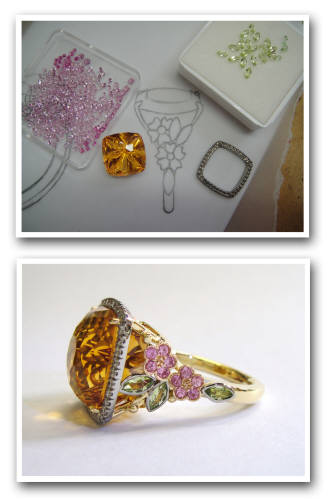 Robinson Designer Goldsmith uses flowers as part of many of its designs.

“When you see a ring that has been lovingly handcrafted by a master, it really stands out from the rest.”

A ring’s setting is the coming together of fine gems, precious metals, craftsmanship and inspiration.

While gemstones often play a prominent role, it is only when the gems and their settings complement each other that a truly exceptional ring is born.

The classic six-prong setting invented by Tiffany & Co. in 1886 has since spawned countless copycat designs. This particularly innovative setting holds the diamond above the finger, allowing more light to enter from the sides, increasing the diamond’s brilliance. JCK Magazine named the setting as its top product that revolutionized the jewelry industry.

The world’s most unique rings are works of art. Ken Robinson of Robinson Designer Goldsmith in New Zealand says craftsmanship is what sets those rings apart: “Today, nearly all rings are mass produced by machines in large factories. When you see a ring that has been lovingly handcrafted by a master, it really stands out from the rest.”

The inspiration for a ring can come from many places.

Flowers are a common source of inspiration, with petal-like prongs holding a gemstone in their center. The Harry Winston Sunflower ring takes it one step further by modeling a ring after an entire flower; Tiffany & Co. flower rings have their draping petals; and Cartier’s Caresse d’orchidées featuring orchids embellished with diamonds.

Water brings a sense of calm as well as movement to pieces, with diamonds and sapphires hinting at its color and sparkle. Van Cleef & Arpels’ Hydor ring, with mystery set diamonds and sapphires, recreates the sea in its swirling design, with diamonds appearing as bubbles near the surface. An upwards spiral closes in on the 20-carat Ceylon sapphire center stone. Similarly, Harry Winston’s River ring has two bands of baguette diamonds with a band of round sapphires meandering over them, reminiscent of a river.

Of course, not everything that can be imagined can be made into a wearable piece of art. “It’s almost like a puzzle each time we make a piece; you have to think things through very well to make sure the jewel will be durable while at the same time making sure the structure of the piece doesn’t distract from its beauty,” says Robinson.