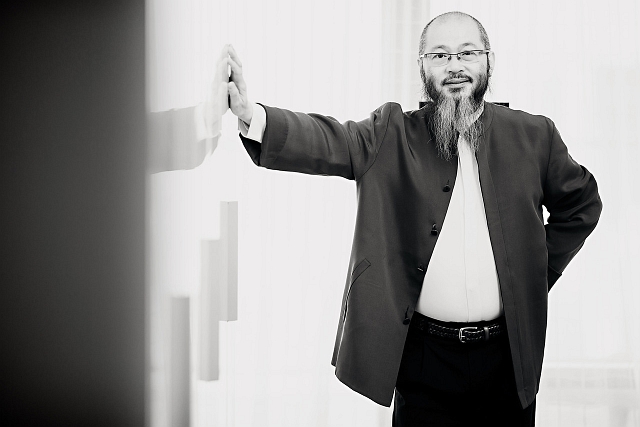 After a successful second run at this year’s biennale in Paris, a lot more heads are turning toward Wallace Chan. All photos in this feature are courtesy of Wallace Chan.

With the mystique of a shape-shifter, Wallace Chan transcends the boundaries between time and culture. One of the most sought-after luxury jewelry designers today, he rose to the scene in the late 1980s, gaining international renown for his innovative trademark Wallace Cut, a method that uses the ancient art of intaglio to create a three-dimensional etching on a transparent gemstone. This year’s Biennale des Antiquaires in Paris marked the second time Chan exhibited at the extremely prestigious show; two years ago, he was the first Asian jewelry designer invited to exhibit.

Chan is a person who claims to have never initially dreamed about becoming an artist. What follows is a chronology of remarkable passion and persistence. 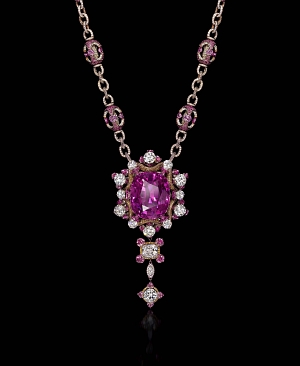 Chan grew up in Hong Kong during a time when there were more people than jobs. Life was hard in his family, and toys or luxuries were things to be dreamed of. “Food and warmth were our only pursuit in society,” he said. “When I was only nine or 10 years old, I already knew what it meant by no pain, no gain, and I started to work very hard in order to earn a living.”

When he was 13, his family suffered financial setbacks that forced him to leave school. Chan became even more determined to succeed. Whenever he was able, he liked to hang out near book vendors on the street. “I couldn’t afford the books, so I would just flip through the pages. Sometimes when I lingered there for too long, I got told off by the sellers.”

Yet Chan wouldn’t change any of it. He says, “If you give me the chance to choose, I would still choose to live the same childhood I had. Those years of hardship trained my willpower and equipped me with persistence.”

In 1973 Chan became a sculptor’s apprentice. Conditions were harsh, and he spent his time doing everything from cleaning to babysitting. But something opened up in him and he saw it was a path that could lead to income, food and warmth. He said,   “The roughness of the life ignited some kind of ambition in my heart, and I knew if I wanted to improve my life, I had to work hard.” 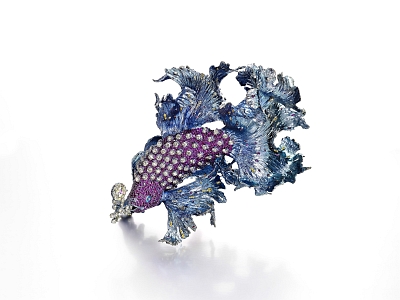 Gleams of Waves. With yellow diamonds, ruby and pink sapphire, the colorful fish is an exploration in existence.

From apprentice to entrepreneur

After a nine-month apprenticeship, Chan struck out and opened a gemstone workshop. He continued to evolve, perfecting his technique, learning wherever he was able, using whatever tools were at hand. One day a client asked him if he could carve a turquoise cameo for him. At the time Chan knew nothing about cameo, but he accepted the challenge and began to immerse himself in a study of Western sculpture, which led him to the art of cameo and intaglio, a craft that would ultimately change his life.

Chan pursued the technique of cameo and intaglio with the same intensity he applies to everything in life. “I saw a book on Michelangelo in a book store,” he says, “And my interest in the interplay of light and shadow, muscles and body movements, as well as dramatic effects of Western sculpture, was ignited. I was really curious.”

He couldn’t afford to go to Europe and explore sculpture there, so he began to haunt the graveyards in Macau, where he spent hours studying the marble sculptures of saints and angels. This led to more study on Greek and Roman mythologies, all which have found expression in his creations.

“I have been standing at a place where the East meets the West,” he says. “I am influenced by both cultures. Like a mixed child, the two cultures have become my blood running in my veins throughout my whole existence.” As a result of this melding, Chan’s work transcends cultural and social ideologies. His poetic pieces with their scintillating ethereal quality draw on the mythology of both the East and West.

His 40 years of persistence and hard work is paying off. In 2010 Chan was invited to hold a solo exhibition at the Capital Museum in Beijing. This brought his work to the attention of the Biennale des Antiquaries, and in both 2012 and 2014 he has been invited as an exhibitor, a dream that had been born several years earlier when he visited the Biennale for the first time. 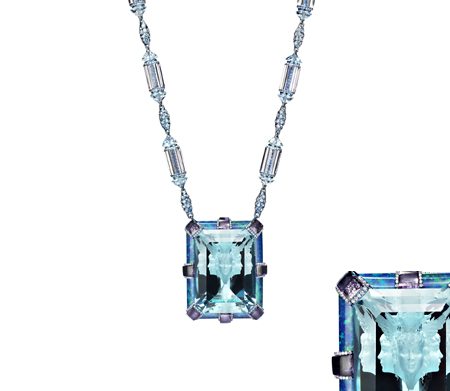 Biennale necklace “Now and Always.” This piece uses the world-renowned Wallace Cut to depict the goddess, Horae. From inside the aquamarine pendant, five faces peer out in all directions as if the goddess were caught inside the facets. The Wallace cut pendant revolves around the interplay of light and shadows, change and permanency.

Probably the most significant contribution Chan has made to the gem and jewelry world is the Wallace Cut. Drawing on his in depth study of cameo and intaglio, this method is the perfect example of how eastern philosophy and western techniques have blended and informed his process. The Wallace Cut is a carving technique that draws on the ancient Italian intaglio method to create a human face etched onto a transparent material so it has the eerie illusion of a face floating inside a gem. The figure is three-dimensional and amazingly detailed. The backside shows a classic silhouette, but from the front can be seen an intricate characterization that appears both in portrait and in profile.

Chan says the Wallace Cut is the result of reverse thinking, which was born from his innate curiosity, prompting him to repel logic and break through limitations.  “Reverse thinking results in non-habitual movements of my hands,” he says.

Each piece goes through a similar transformative process. Regarding his rendition of the Goddess Horae, a piece he exhibited in the recent Biennale, he says, “Every drill was an act of reverse thinking. Left is right. Deep is shallow. Front is back. Since the space inside is the face of the goddess herself, there was no space to move around. But that’s how the image acquired multiple reflections, creating different angles of the face. I carved the front view of the goddess and she would be looking at me sideways!”

The Wallace Cut may be rooted in Western intaglio for its technique, but its essence is like a Zen koan: it looks slightly different each time you glance at it.

This element of illusion underlies all of Chan’s work, giving it that bit of mystery. Nothing is as it appears.

Look away, and then glance back quickly, and watch the entire piece shimmer and change.