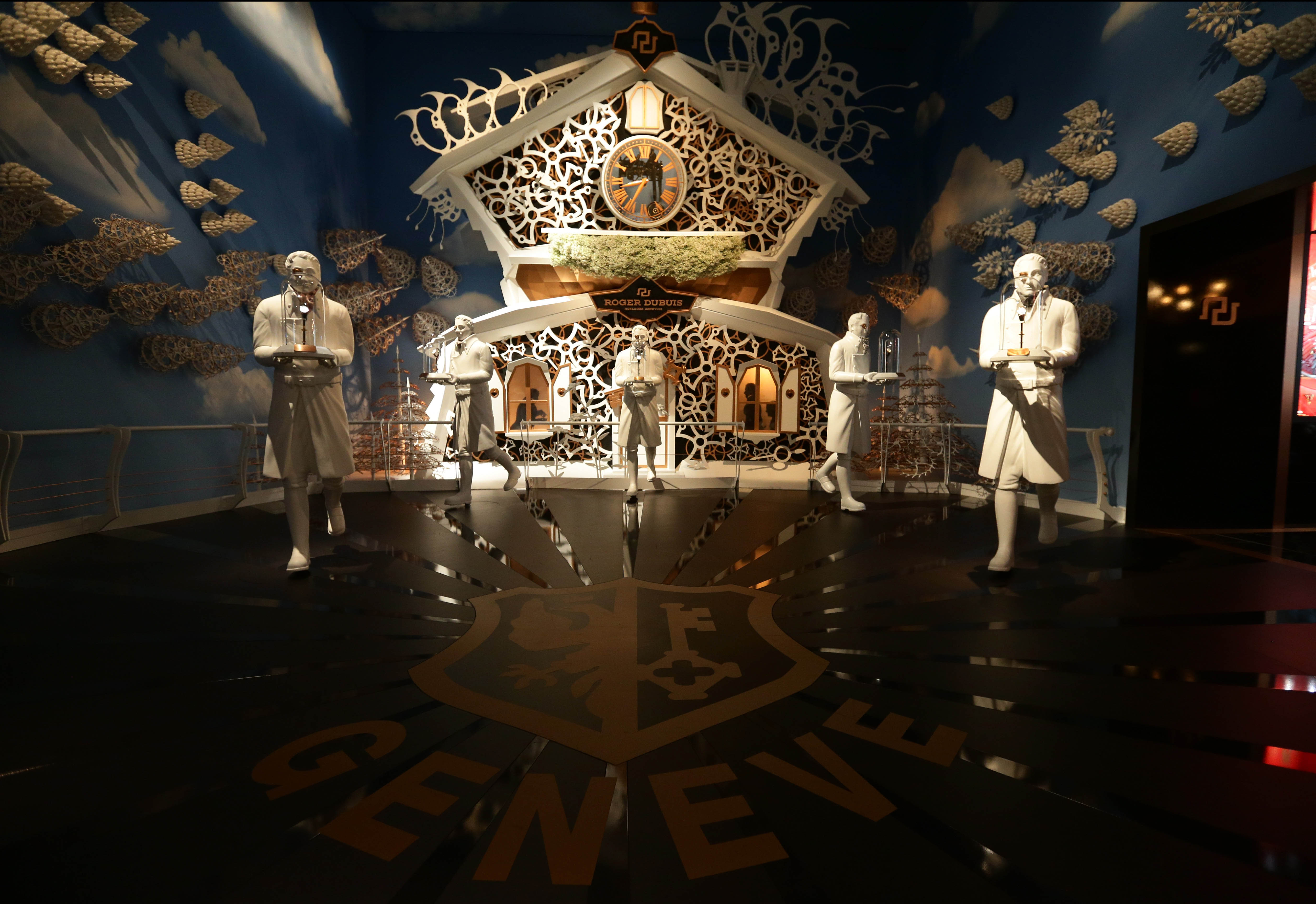 View at the Roger Dubuis stand at the SIHH on the fair’s first day.

Claire Adler reports on the first of the year’s major watch fairs from Geneva.

With SIHH visitors estimated to hit 13,000, additional watch companies – including LVMH-owned Tag Heuer, Zenith and Chaumet – hire out venues and suites in Geneva’s most glamorous hotels to showcase their own offerings to this captive audience, laying on limousines to transport journalists and buyers to and from the main SIHH show. Security is tight and luxury is definitively the name of the game. 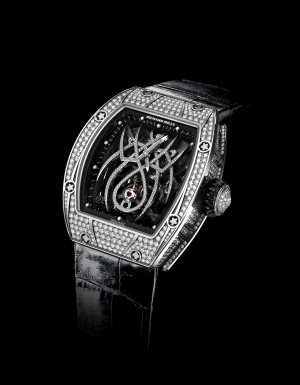 A celebrity turnout is par for the course at the SIHH. To mark the introduction of its new Aquatimer diving watches, IWC treated 800 guests including models, actors, Olympic gold medalists and racing-car drivers to an evening in a simulated world above and below the ocean, with entertainment in the form of a specially choreographed performance by Cirque du Soleil narrated by Ewan McGregor. Guests included Kevin Spacey, Lewis Hamilton, Adriana Lima and Susan Sarandon. Bar Rafaeli made an appearance at the Piaget party on Monday night while Montblanc has named Australian Les Miserables actor Hugh Jackman as global ambassador – an interesting move for the brand, which hasn’t worked with a celebrity before.

One area watchmakers are exploring in more depth this year is women’s watches. An increased number of women’s watches were on show at Van Cleef & Arpels, Richard Mille, Audemars Piguet and Ralph Lauren. The balance has now radically changed at Ralph Lauren between the number of watches designed for men and those designed for women. In the past, 75 percent were mens’ watches. Now it’s the other way round. Richard Mille has now produced a watch designed in collaboration with celebrity face Natalie Portman – an intricate diamond encrusted spider tourbillon.

The overall mood in luxury watches is currently one of cautious optimism. According to the Federation of the Swiss Watch Industry, Swiss watch exports in the 11 months up to November were up just 2 percent year on year, although since 2010 growth had been 10 percent or more.

In response, some watch brands including Baume & Mercier, Montblanc and Parmigiani introduced more affordable pieces, in an effort to target the growing middle class and younger customers in China, India and Latin America. 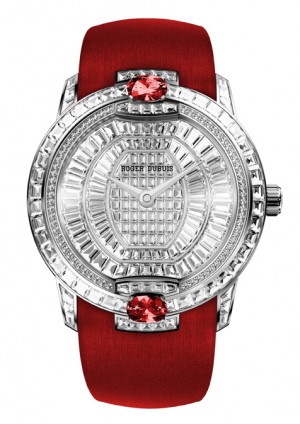 The Velvet Haute Joaillerie with rubies, by Roger Dubuis, is a watch for women. It boasts diamonds, two rubies, and a red belt.

Looking to the future

Montblanc’s new CEO, Jerome Lambert, joined the company half a year ago after over a decade at Jaeger le-Coultre. Lambert has already introduced important changes, including an emphasis on lower priced watches. While you’d be hard pressed to find a watch at the SIHH for under $5,000, Montblanc’s new Meisterstuck in steel is priced at a competitive €1900. The company’s vice president of marketing, Jens Henning Koch, claims that despite its price, the watch bears benchmarks of a luxury timepiece, a sunray finish on the dial known as guilloché, components which are polished by hand for a matte or shiny texture and dauphine, or bevelled, hands.

Still, the penchant for affordable, conservative-style luxury was not the story with other brands eager as ever to show off their specialist artisan skills and technical prowess and gain exposure to the richest sybarites in the world. Van Cleef & Arpels, Vacheron Constantin, Cartier, and Piaget all spring to mind. Highlights and likely future heirlooms include Piaget’s Altiplano 38MM 900P – the world’s thinnest mechanical watch and the culmination of three years work by two micro-mechanical engineers; Cartier’s Ballon Bleu de Cartier Floral Marquetry Parrot watch with a dial laid with dried rose petals in the form of a parrot’s blue and yellow plumage; Vacheron Constantin’s Patrimony Traditionelle Haute Joaillerie Petite Modele with its gleaming array of 10.6 carats of diamonds; and Van Cleef & Arpels’ Poetic Complication Midnight Planetarium, which tells its wearer when Jupiter will next be aligned with Mars. The disks on the Planetarium watch rotate at different speeds so that each sphere makes one revolution around the dial in the time it takes the actual planet it represents – Mercury, Venus, Earth, Mars, Jupiter or Saturn – to orbit the sun. Saturn’s revolution takes the longest of the six at 29 years, while Mercury’s is the shortest at 88 days.

Of course, the most sophisticated and extravagant watches are designed for people who are passionate about true luxury, a quality most often to be found in the details. For many watch brands in Geneva this January, setting the scene for the watches was equally as important as the watches themselves. The IWC booth resembled an underwater extravaganza with a giant fish tank and bar-cum-reception stocked with rows of Bombay Sapphire gin and Absolut Vodka. At Roger Dubuis, eerie and mysterious watchmaker mannequins greeted visitors while holding watches housed in large glass domes. At Ralph Lauren there were real-life models wearing flowing evening gowns, fur shoulder wraps, copious amounts of Ralph Lauren perfume … and Ralph Lauren watches. Meanwhile, at Cartier’s expansive stand, always the largest and boasting the plushest carpets at the show, the staff were so good-looking it was almost embarrassing.