Fashions and jewelry that emerged after World War I were result of a shift in cultural and social values.

Coco Chanel said it best: “Fashion is not something that exists in dresses only. Fashion is in the sky, in the street, fashion has to do with ideas, the way we live, what is happening.”

After World War I, the 1920s were ripe for change.

The world had changed. Men were at war, leaving women to enter the workforce and step out of the sphere of the home. After the war, going back to the idyllic pre-war lifestyle was no longer an option. Cultural, social and technological shifts birthed a new breed of woman: the flapper. Her fashions were a statement in response to the times. A forward-thinking woman who defied customs and broke from traditional gender roles, the flapper is a fashion icon. Even today her bobbed locks, beaded dresses, and fantastic Art Deco jewelry are found among top trends. A recent revival of flapper fashions have appeared on the runways of Ralph Lauren, Marc Jacobs and Gucci in anticipation of Baz Luhrmann’s reinterpretation of the literary classic, The Great Gatsby. Tiffany and Co.’s highly anticipated Gatsby-inspired line, the Ziegfeld Collection, featuring pearls, onyx and silver, will debut just ahead of the movie’s May 10th release.

The evolution of accessories parallels the transformation of women’s clothing to reflect ideals of comfort and liberation. Short hair and lowered necklines created a need for necklaces while sleeveless dresses spawned a need for bracelets. Women were smoking more, and this led to fashionable cigarette cases and holders. Pocketless slim fitting dresses resulted in handbags to carry personal effects. 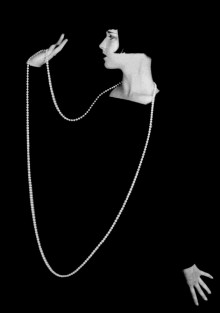 The jewelry of this era featured clean lines, symmetry, geometric shapes and patterns and an overall modern aesthetic. Technological advances made stone cutting machines with the precision necessary for Art Deco designs. An exemplary piece of the period is Van Cleef and Arpels’ Manchette cuff (c. 1926, 1928). The stunning Manchette cuffs could also be worn together as a dazzling choker necklace. Tiffany & Co. also created beautiful pieces inspired by the era.

The 1922 discovery of King Tutankhamun’s tomb and stories of the East inspired many marvelous pieces. Cartier‘s gold and enamel bangle with a pair of carved coral chimera heads and Van Cleef & Arpels’ Necessaire au Dragon and Egyptian Bracelet are excellent examples of Asian and Egyptian homages.

The development of plastics like bakelite altered the world of jewelry by sparking the rise of what Coco Chanel called “illusion jewelry.” Illusion jewelry or costume jewelry refers to gorgeous pieces made from inexpensive materials like glass, wood, papier mache and plastics. It reinforced the idea of valuing jewelry for its aesthetics instead of its materials. No longer privy to the rich, fashion houses like Chanel began selling accessories to the general population. Pieces like the sautoir, dubbed “flapper beads,” quickly gained popularity.

The flapper broke through numerous barriers setting the stage for today’s modern woman. Her daring fashions and taste for opulent jewelry have left a permanent mark on style. The flapper is as much of a part of history as her accessories are a part of fashion vernacular.