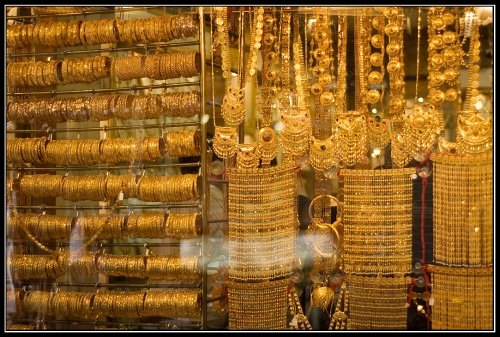 Whether or not you're looking to buy gold, the Gold Souk in Dubai is well worth a glimpse.

No matter your shopping style, there’s a destination for you—from exotic to cost-conscious

Bling, gems, jewels – anyone in the know knows that your average department store isn’t the place to make a big purchase. Whether you’re seeking an engagement ring, a one-of-a-kind statement piece, or simply looking to make a classic purchase such as a watch or diamond studs, you might have to travel to find the best price and selection.

The next time you make an investment, skip the jeweler and head straight to the source. These spots are some of the world’s best to make your next purchase.

From Rolex to Patek Philippe and many more, Geneva is arguably the world’s watch capital as well as its banking power. Nearly every major watchmaker in the world has at least one retail outlet here, and many make their corporate home in the city as well. We’d suggest Le Richemond hotel as your base of operations. The luxury property has the world’s best-known (if not the only) “watch butler” on site. Pierre Jacques will guide consumers through the purchasing process, from education to negotiation, as well as arrange private tours of the city’s Patek Philippe museum, meetings with watch experts, and private buying excursions into the city’s most coveted shops.

Vintage and estate empire: Sotheby’s and Christie’s in New York and elsewhere
Sotheby’s and Christie’s are arguably the world’s highest-end auction houses for jewelry and boast offices in New York, London, Geneva and Hong Kong. Those seeking estate and historic pieces of value can work with a specialist at either firm to attend auctions in person or participate via phone. Sotheby’s sales take place in February, April, October and December in New York, April and October in Hong Kong, May and November in Geneva and March, July and December in London. The department has sold the collections of the Duchess of Windsor, Betsey Cushing Whitney, Jacqueline Kennedy Onassis and many more. Christie’s works from a wider base of locations, including India, the west coast of the United States, Dubai, Germany, China and Singapore, but offers a no less impressive roster of contacts and sales, including the recent auction of Elizabeth Taylor’s $44 million dollar collection.

Gems galore: Tour the mine
Find emeralds in Colombia, Rubies in Kenya, Opals in Australia and Tanzanite in Tanzania by going directly to the mine itself. The International Colored Gem Association in New York can arrange tours of mines and locations directly. Cutting out the middle man lowers the price, but the experience of shopping and purchasing a stone directly can also be a memorable one.

Diamonds are a girl’s best friend: Israel, India & Africa
Many are familiar with the diamond mines of Africa, where names like DeBeers and Mervis mine their signature clear and colored stones, but they may not know that Israel is the location where most of the gems actually land before sale to other countries. Zed Mervis told Forbes that the best way to find a fair deal in these locations is to go through a wholesaler or contact a designer directly.

Get it made: India
Most of the world’s jewelry is made and produced in India, and, as a result, it’s a wealth of opportunity for buyers. To get the best price, work directly with a goldsmith or designer to have something made just for you. Jaipur is a common city for gem lovers, and is the world’s largest gem cutting center, and also home to the famed Gem Palace, established in 1852, where almost every kind of stone and craftsman can be found. It is recommended that buyers pay cash for the best prices.

Go for the gold: Dubai
It’s easy to find gold, but less so to find it affordably. The Gold Souk in Dubai offers more than 300 retailers who deal exclusively in gold and jewelry. Dubai is renowned for its gold as it is one of the most acclaimed worldwide destinations to buy pure gold, and the amount of merchandize at the Souk is worth the price for the selection alone. If you’d prefer to stay closer to Europe, The Grand Bazaar in Istanbul offers Kalpakçılar Caddesi, the gold jewelers’ road, a popular stop for visitors, as well as thousands of other shops. While these two stops might be more expensive than other cities, you’re sure to find what you’re looking for.

Consumer heaven: Las Vegas
There are any number of places where the big names in jewels sell their goods, but Las Vegas is particularly known for its ready flash and cash. From Graff to Tiffany’s and everything in-between, those who prefer designer names and aren’t afraid to pay full retail price will find what they’re looking for right alongside casinos, fine hotels and dining galore.