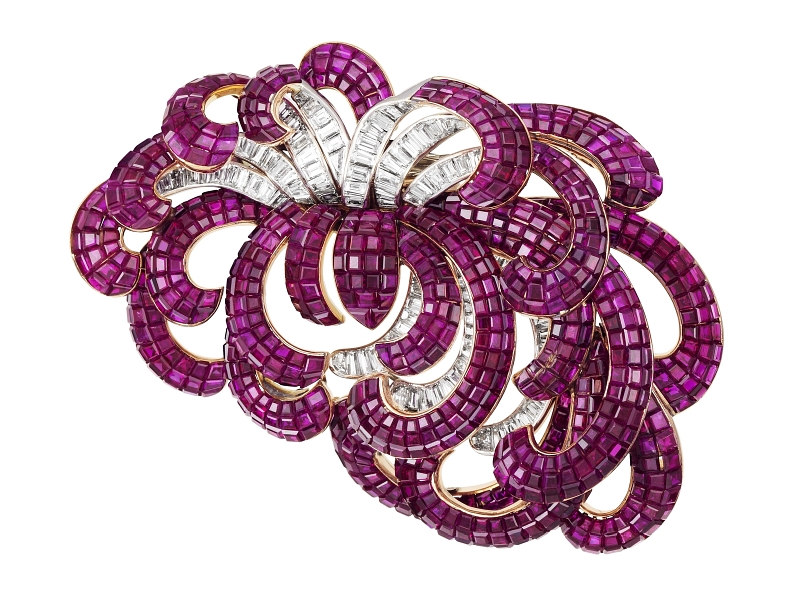 The chrysanthemum clip by Van Cleef & Arpels, 1937, features curved petals set with 803 rubies and scrolling lines with 107 diamonds. Photo courtesy of the Museum of Contemporary Art in Shanghai.

Few have achieved this as successfully as Van Cleef & Arpels.

The jeweler, founded in Paris in 1906 – in the city’s jewelry square, Place Vêndome – has always pushed the boundaries of jewelry as art.

In 1916, the company produced wooden jewelry, which might seem strange, but did showcase the house’s willingness to go out on a limb in the pursuit of innovation from the beginning.

Van Cleef & Arpels’ Mystery Setting, a patented process that sets precious stones without visible prongs, allows designers to create jewel-encrusted masterpieces, showcasing the gems themselves while the metalwork remains hidden. Pieces appear as though made from glittering color.

Click to enlarge
The Zip necklace, 1951, a Van Cleef & Arpels trademark, features a second clasp that allows it to be worn as a bracelet. Photo courtesy of the Museum of Contemporary Art in Shanghai.

This has also inspired the company’s signature use of color in its jewelry, which comes from a rainbow of colored precious gems. JCK Magazine named this process as one of its top 10 products to revolutionize the jewelry trade. “This perfected technique has allowed them to possess a niche of creativity and finish that is unmatched,” says Steve Whitney, an expert appraiser with more than 30 years of experience.

The use of color was showcased in the company’s Alhambra Collection, which launched in 1968 and reflected the colors of pop culture. Exceptionally fine rubies, emeralds, sapphires and fancy-colored diamonds all feature prominently in the company’s delicate pieces, using color to its full effect. “Van Cleef has always used only the finest in qualities of anything they make. They strive to develop unique collections with unusual patterns and combinations. Variety and innovative design alongside pure beauty make their pieces stand out in the crowd or a jeweler’s window,” says Whitney.

The jewelry pieces are varied, sometimes whimsical and fanciful. They are not pieces for the faint-of-heart.

Asian art inspired many of Van Cleef & Arpels’ pieces through the years, from the 1920s to today. Tokyo’s Mori Arts Centre staged a retrospective of these designs in 2009, highlighting some of the Japanese-influenced pieces, such as the jardin japonais (Japanese garden) clip from 1924. In the summer of 2012, Museum of Contemporary Art, Shanghai held an exhibition, “Timeless Beauty,” that celebrated more than a century of Van Cleef & Arpels’ jewelry design.

Click to enlarge
The jeweler, founded in Paris in 1906 – in the city’s jewelry square, Place Vêndome – jewelry as art.

The company doesn’t limit itself to only one area for its inspiration. In 2011, the Smithsonian’s Cooper-Hewitt, National Design Museum in New York held “Set in Style: The Jewelry of Van Cleef & Arpels,” celebrating the artistry, innovation and style of the jeweler. “This is the first exhibition to approach the work of Van Cleef & Arpels from the perspective of a design museum and focus on the establishment of the design house in New York and the role of American style and taste in the market,” said Bill Moggridge, director of the museum.

Patrons of Van Cleef & Arpels have included the Duchess of Windsor, Grace Kelly, Elizabeth Taylor, millionairess Barbara Hutton, and Prince Rainier and Princess Grace of Monaco. “They have built their reputation by catering to the world’s elite: kings, queens, celebrities and high society from around the world. One knows that one’s getting the best and only the finest in quality and workmanship when buying from Van Cleef & Arpels,” says Whitney. 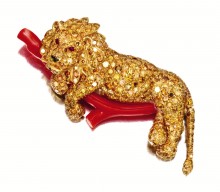 
New York socialite Brooke Astor’s estate sale at Sotheby’s in September 2012 featured a golden lion pin from Van Cleef & Arpels. The lion has ruby eyes and the body is encrusted with white, yellow, coffee-colored and pink diamonds.  “A piece like this is a one-of-a-kind piece, and it’s for someone who has a lot of other jewelry,” said Eric Freedman, president of Freedman Jewelers, Huntington, NY, and former president of American Gem Society. The piece had an estimated value of $20,000–$30,000; it sold for a respectable $134,500.

Since its early years, Van Cleef & Arpels has made watches. It was the first company to use leather straps, and even produced a wooden watch in 1916. Since 2003, the company has partnered with Jean Marc Wiederrecht. “All the movement pieces that we create are always finished to the highest degree of beauty and perfection,” says Wiederrecht. “Every time we have enough space, and we are able to, we decorate elements… These elements are really beautiful and deserve to be admired, but they are hidden under the dial. But it is the signature of the house, being everywhere, even where no one can see, to care about each single detail.”

Van Cleef & Arpels is no longer limited to a single store in Paris. It opened its first U.S. store in 1939, and now has more than 160 stores in 30 countries around the world.

It continues to innovate; its recent between-the-finger rings vine over and around the fingers, making the hand a part of the jewelry.