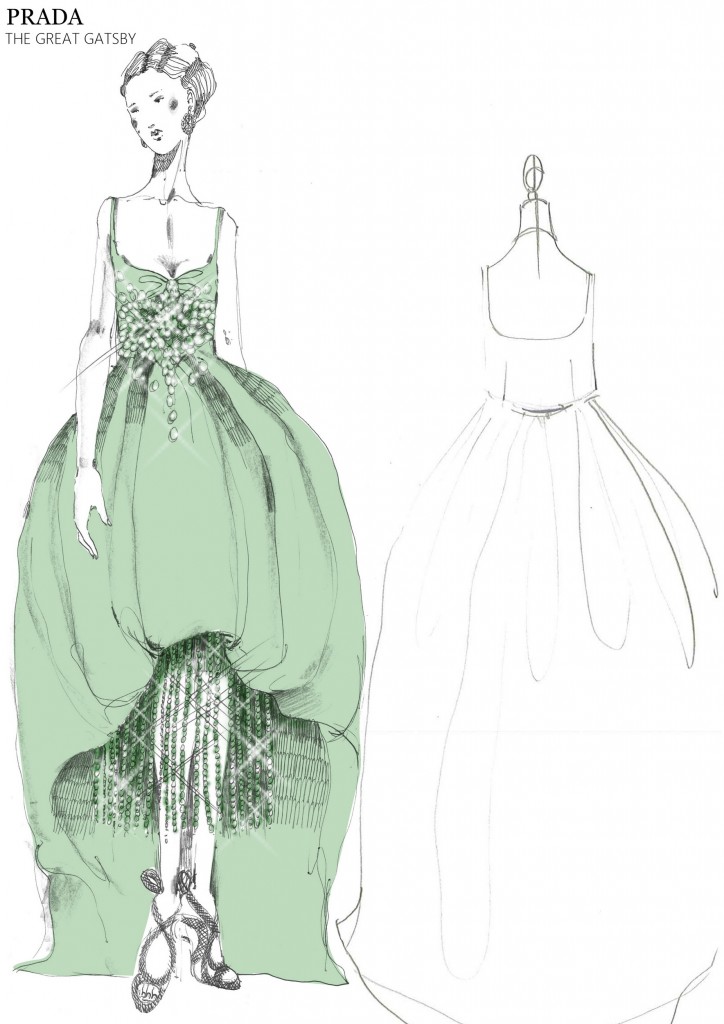 Radzmire dress with bustier embroidered with pearls, stones and sequin fringes. Inspired by a revisited silhouette of the 1920s, it is made contemporary by the use of modern fabrics and embroidery of the 1950s. Image courtesy of Prada.

Styles come and go – and often come back again. This is the case with the fashions of the 1920s, which are coming back with a new and modern twist. 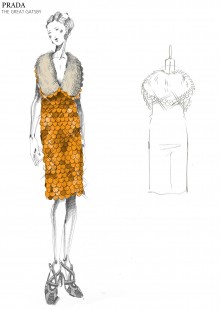 Elegance and style are synonymous with both F. Scott Fitzgerald and his 1925 book, “The Great Gatsby.” Director Baz Luhrmann’s 2013 movie adaptation, forthcoming this May, brings the era and its fashions to life. Luhrmann’s wife, award-winning costume designer Catherine Martin, has designed the costumes while working with Miuccia Prada to create clothing that both evokes the era and brings the luxury of the book to the movie.

Prada created more than 40 cocktail and evening dresses for the movie. “Our collaboration with Prada recalls the European flair that was emerging amongst the aristocratic East Coast crowds in the 1920s,” says Martin. “The fashions of the time saw the development of a dichotomy between those who aspired to the privileged, Ivy League look of wealthy Long Island and those who were aspiring to European glamor, sophistication and decadence. Our collaborations with Prada reflect the collision of these two aesthetics.”

Prada worked to bring influences from the company’s collections of the past 20 years to the costumes for the film.

“The costumes created for the Great Gatsby seem to be fresh, modern designs heavily influenced by the ’20s look,” notes Lauren E. Rudd, assistant professor of Textiles, Merchandising, and Design at Middle Tennessee State University. “Additionally, because the looks are fresh and modern, they are much more likely to influence contemporary fashion looks.” 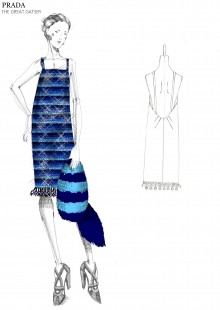 Click to enlarge
Multi-striped sequin dress with trimmed embroidery at the bottom. Inspired by the Prada Spring/Summer 2011 collection.

The movie also showcases the 1920s passion for jewelry, with layered pieces, long necklaces and jewelry in the hair. Sleeveless dresses gave more places to put jewels, like cuffs and multistrand pearl bracelets, which Daisy wears.

The movie’s men also get a makeover with DiCaprio and Tobey Maguire, as narrator Nick Carraway, having period-style clothing made by American clothier Brooks Brothers. In keeping with his character, DiCaprio is decked out with fine suits and extravagant accessories like watches, cufflinks and collar pins.

“Men could be peacocks in this time and take pleasure in their appearance. Gatsby used his clothing as another way of showing the world his wealth and importance,” notes Aly Renee Amidei, artistic director and costume designer at WildClaw Theatre in Chicago.

The 1920s also brought sportswear to the fashion forefront, which is shown in some of DiCaprio’s scenes. “Sporting fashions like cricket sweaters and tennis whites became popular for everyday dress,” says Amidei.

The lines, embellishments, jewelry and styles of the 1920s are making inroads in today’s fashions. Prada’s inspiration for the movie’s costumes came from some more recent collections, including dresses from the Fall/Winter 2011 collection.

Jewelry designer Ivanka Trump was inspired by the bold jewelry of the 1920s, some of which is offered as part of a luxury Trump Hotel Central Park package called the Great Gatsby Package. The jewelry line includes a wide shagreen and onyx cuff with clear Art Deco lines.

“I think we are already seeing this [1920s influence] in accessories, with a renewed interest in hats for both men and women,” says Amidei. “Beaded embellishments, feathers, dropped waistlines, and column dresses were all over the recent runway shows.”